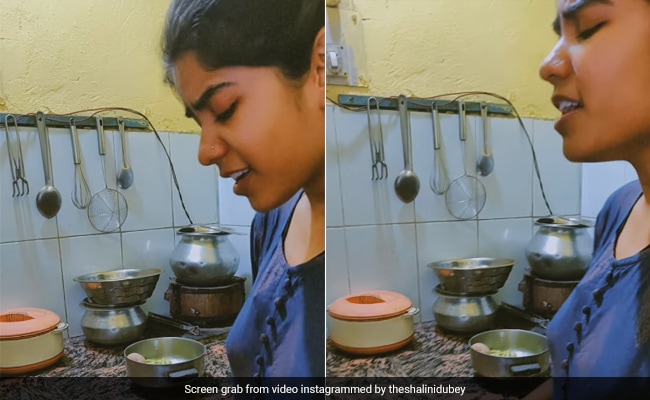 Shalini Dubey's version of 'Pasoori' is a hit on social media.

'Pasoori', sung by Pakistan artists Ali Sethi and Shae Gill, started making waves across the globe when it debuted on Coke Studio Season 14 in February this year. Since then, several Instagram users have posted creative reels featuring the song. Others have posted videos of themselves humming the peppy track.

But now, a video of a woman singing 'Pasoori' while doing kitchen chores is going viral on social media. The video has been shared on her Instagram account.

The woman, Shalini Dubey, is a singer and a performer, according to her Instagram bio. She is seen singing the song while chopping onions in her soulful voice.

Ms Dubey said in the caption of the post that a friend spontaneously recorded the video while she was working in the kitchen, which she called her favourite place to sing.

She has also tagged Ali Sethi and Shae Gill in her post.

Uploaded on May 16, the video has amassed more than 18 million views and over two million likes. "Pasoori in kitchen. @shreya_dubey2405 captured me while singing in the kitchen ...this is my favourite place to sing," she captioned the post.

Mesmerised by her voice, users have left urged Ms Dubey to "look for a career in singing".

"Better than real," a user commented. "After seeing this video singing shows be like: I am coming," added another.

Last month, a Dutch singer won hearts on the internet by singing the catchy song with much enthusiasm and gusto. The Dutch singer, who is known for making covers of popular Indian songs, shared the cover of Pasoori on social media, which people evidently adored. In the clip, Ms Heesters is seen energetically performing the lively number, covering it with the perfect rhythm.