In the viral video, the woman fills her toilet bowl with candy and ice cream 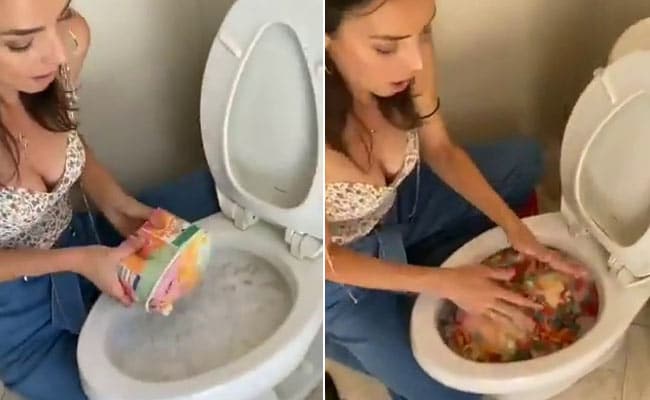 Bizarre footage shows a woman mixing a drink inside a toilet.

In a world where bizarre videos are a dime a dozen, this one manages to stand apart. Footage that has gone viral on social media shows a woman making a drink inside her toilet bowl and serving it to guests at a party. The bizarre footage has garnered more than 6.6 million views on Twitter, where reactions ranged from horrified and appalled to disbelieving.

In the viral video, the woman fills her toilet bowl with candy and ice cream before opening the flush compartment and dumping a bunch of drinks -- including Fanta, Sprite and a whole bottle of fruit punch -- inside it. She then pulls the flush so all the components of her party drink are mixed together inside the toilet bowl, creating a sugary and colourful concoction that she proceeds to serve to her guests.

The clip has crossed 6.6 million views on Twitter, where people were quick to register their disgust.

"This is gross on too many levels," wrote a Twitter user. "It is fundamentally nasty," another remarked.

Just whyyyyyy???? Like how will they clean that up?? pic.twitter.com/OdZlPTsImc

“it went from worse to worser.”pic.twitter.com/Z7TAJKmqFC

Many theorised that the video was supposed to be satirical, but criticised the content creators for wasting food.

"I bet they did this s**t on purpose for 'Content'. But, who in the right mind would waste this kind of food doing that in a TOILET?!" one Twitter user said.

The video was first shared on a Facebook page called 'The Anna Show', which has clarified that it was scripted for "entertainment purposes only".

"Please note that this page features scripted dramas, parody and satire. The events that take place in this particular short-film video are for entertainment purposes only. Similarities to actual people or actual events are coincidences," the Facebook page clarified.