Both of them are wearing traditional Korean outfits which are called hanboks. 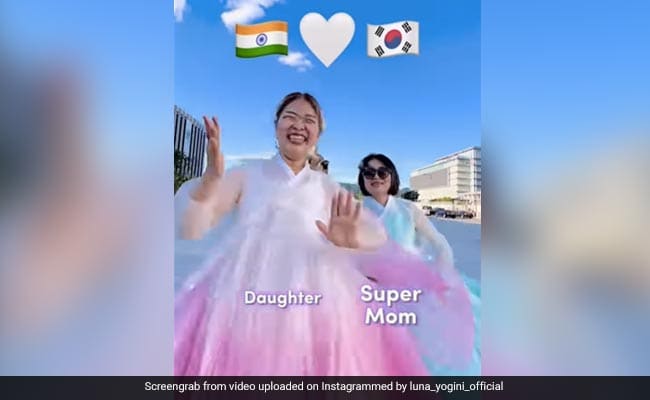 They were dancing to the famous song "Ra Ra Reddy I Am Ready".

Music is a universal language that crosses cultures, races, religions, gender and anything else which can divide people. A sliver of hope, happiness or even sadness can be transmitted from one soul to the next with just one music note. Witnessing an amalgamation of two cultures is always a delight. In one such instance, an Indian woman danced with her Korean mother-in-law on a superhit Telugu song.

In a video jointly shared by Dasom Her and Jungyi Lee on Instagram, the two women can be seen dancing to the famous song "Ra Ra Reddy I Am Ready". The song was released this year for the movie "Macherla Niyojakavargam" and is sung by Lipsika and Aditya Iyengar. The women can be seen dancing energetically, matching beats to the hit number. Both of them are wearing traditional Korean outfits which are called hanboks. She calls her mother-in-law "Super Mom", as seen in the text of the video.

Along with the video, Ms Her wrote in the caption, "No matter how dark this world gets, we will conquer it with love. Love always wins! Love always! This song, this dance, this moment with my mother, everything keeps me going! My love to you! I hope you also keep going! We are here for one another!"

The clip was posted on September 4 and since being shared, it has amassed over 8.8 lakh views and over 72,000 likes.

"Filled with happiness watching both of you dance," said one user.

A second user commented, "Looks like you two really enjoying the dance so much. I loved it. Lots of love to mom and u."

"Look at their enjoying faces," said a third person.

Many users also left heart emojis in the comments section.

"I know no one can stand like that after hearing our telugu music, that's really magic everyone will react for the beats," added another person.

"It's rare to see a korean dancing to telugu song.. I luv it," said another user.