Viral Video: This Flash Mob Is Winning Hearts 'All Around The World' 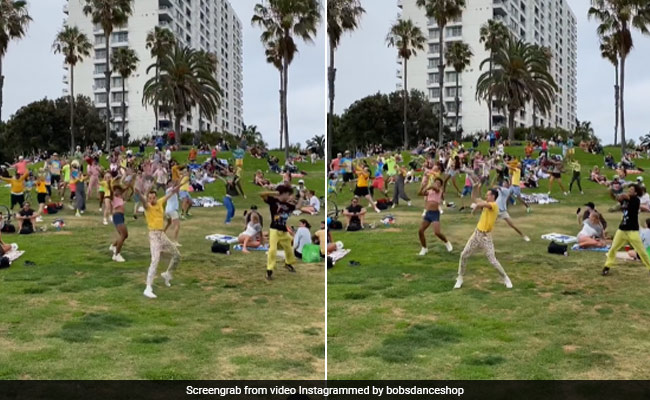 This surprise dance performance is winning hearts on social media.

In between the daily deluge of grim news on social media, the Internet managed to find a "timeline cleanser" in the form of a flash mob performance that is currently going viral online. A group of dancers got together on Sunday to treat park visitors in California, US, to a surprise performance. Footage that has gone viral on Twitter shows them dancing to the hit song Around the World (La La La La La) by 'A Touch of Class' as surprised spectators around them cheer them on and film the performance.

The flash mob was organised by Bob's Dance Shop and took place at a park in Santa Monica. Sharing footage of the performance on Instagram three days ago, the dance studio revealed that everyone who participated in the flash mob practiced for only two hours. "It takes a level of courage, patience and commitment to show up and learn, rehearse and perform a dance in front of people you don't know," the studio wrote.

The performance began to gain attention after the video was shared on Twitter. Former American basketball player Rex Chapman gave a shout-out to the flash mob and hailed the video a "timeline cleanser".

The video has racked up over 7.7 lakh views on the microblogging platform, along with 27,000 'likes' and hundreds of compliments.

The video begins with a shot of several groups of people sitting on a grass. One man gets up and begins dancing as music starts playing in the background. He is soon joined by another dancer, and then another, until very soon dozens of people are performing.

"It's been almost 2 years since we've been able to flash the public like this. It brings so much pure joy to us and everyone participating in the dance and we are lucky to be able to share that joy with the public," Bob's Dance Shop wrote while sharing the video on Instagram.

In the comments section, hundreds of Instagram users thanked the dancers for bringing a smile to their face.

"Oh my goodness. This brought me so much joy," wrote one person in the comments section.

"This made me smile so big," said another, while a third person added, "This was good for the soul."

To participate in the flash mob, dancers were required to carry proof of vaccination or a negative Covid report.