The video posted on Reddit has shocked the internet with people analysing the actual consequences of a nuclear bomb. 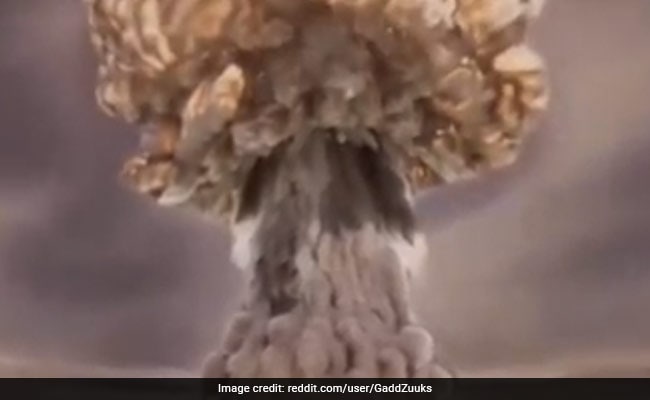 Nuclear cloud of dust seen as in the video.

A video that is going viral on the internet shows what it would be like to witness a nuclear bomb detonation in virtual reality.

The video, which shows a virtual reality environment, shows a beach on a pleasant day just ahead of the nuclear bomb exploding offshore. As soon as it does, the screen turns white in colour. Within seconds, the whole place is devastated and appears like a sandstorm has erupted. The vegetation is uprooted and soon a huge cloud of smoke and dust is seen erupting in the middle of the sky. The sky turns a little purple in colour towards the end of the video with the nuclear cloud of dust sitting in between.

This horrifying one minute, 51-second video was posted a couple of hours ago on Reddit and has shocked the internet. The video has been captioned as, "Nuclear explosion in a virtual reality environment."

The clip was originally posted on YouTube and other social media platforms a month ago and is going viral again now.

So far, the video has received 89 per cent upvotes on Reddit. One user commented, "Everything around would have also been blown away or incinerated, and a huge wave would have come and washed over the area."

"Hard to judge size or distance, but a 1megaton blast is giving you 3rd degree (almost certainly fatal) burns at a distance of 6 miles. The radiation given off at the point of detonation will kill you within a month out to a distance of 1.5 miles. In that VR scenario you're dead," commented a fourth user.