"And that, my friends, is how we evolved from the fish," wrote one person in the comments section. 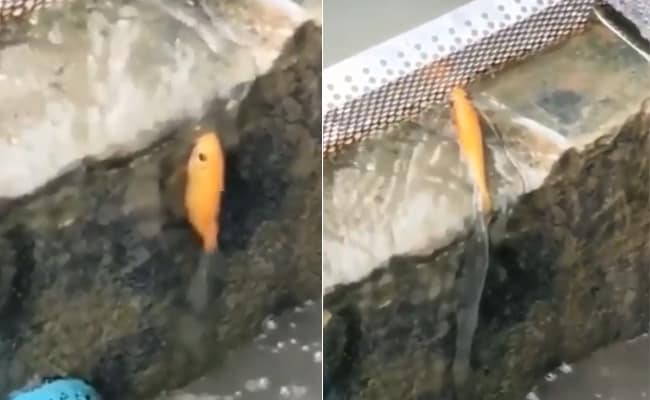 A video shared on Reddit shows a small fish climbing a wall.

A viral video shows a fish 'climbing' a wall and it has left social media users amazed. The video was posted on Reddit two days ago, where the fish's atypical behaviour has collected thousands of comments and raised many questions.

In the video, an orange-coloured fish is seen swimming against the flow of water to 'climb' a wall. It eventually manages to reach the top, where a metal grate prevents it from going any further.

You have to see it to believe it, so watch the video below:

This fish swimming up a wall from r/neartoptalent

Since being shared online two days ago, the video has collected nearly 80,000 upvotes and has been reposted on more than 40 Reddit communities. While some in the comments section praised the fish's hard work in climbing the wall, others highlighted the video as an example of evolution in process.

"And that, my friends, is how we evolved from the fish," wrote one person in the comments section.

"I'm so proud of him. The ending is kind of sad though. He's just chilling like 'now what?'" said another.

"Looks like its sucking its way up the wall," a third commenter added.

Some viewers also raised doubts about the authenticity of the video.

"I realise this sounds like an odd thing to say at first, but I'm pretty sure this is staged," wrote one Reddit user. "My suspicions of any fish videos have been heightened recently due to the Asian fish hole trend, which pretty much involves shoving fish in holes and then pretending you used some wild trick to get them out."

"Now, there are fish that can climb waterfalls, including hillstream loaches and a variety of freshwater gobies. All these climbing species are dorsoventrally flattened, and this fish decidedly isn't. My guess is it's being pulled up the ledge by its mouth with a piece of monofilament or something," wrote the Reddit user.

According to a 2015 report by the National Geographic, climbing fish are "nothing new" and many fish have a natural instinct to head upstream.