"When Your Grandparents Party Harder Than You": Video Will Make You Laugh

The video has racked up over 1.35 lakh views on Instagram 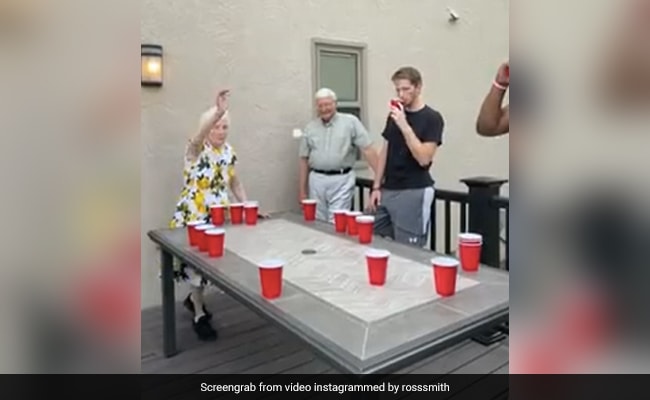 A short video of an elderly couple playing beer pong is going viral on Instagram. Posted by social media influencer Ross Smith, the video shows his grandparents throwing a ping-pong ball into beer mugs kept on the other side of the table with impeccable accuracy. Mr. Smith's granny takes the lead and throws the ball first. As soon as his grandpa does the same, Mr. Smith and his friends jump on their feet in excitement. Mr. Smith then throws his drink in the air and hugs his grandfather.

It appeared that the elderly couple was leading two teams of their grandchildren, and Mr. Smith's grandpa helped his team win. “When your grandparents party harder than you,” he captioned the post.

The video has so far got more than 1.35 lakh ‘likes' and a number of people have commented on it, saying they wanted the granny to win.

“I wanted her to win. He got lucky,” said Cung Le, a former multiple combat sports world champion.

“Granny with the overhand & Gramps with the no arc straight draino,” said Kenny Anunike, a former NFL player.

“I love how he hugged him! These are my grandparent goals!” said another Instagram star named Brooke Abasta-Mason.

Mr Smith, 25, and his 91-year-old granny have attained social media stardom as a team. They initially made six-second videos and posted them on Vine, but later moved to Instagram.

Mr Smith now has 2.6 million followers on Instagram and he regularly posts funny videos with his granny. In one of his previous posts, he shared a photograph of him with his grandma wearing colourful dresses outside an imposing glass building.

He asked his followers, “What's more dope? Granny or this glass house in the desert.”

So, what do you think of these videos? Tell us in the comments section below.