Shared on Twitter by "Creature Nature", the short clip has received over 4,700 views and hundreds of likes. 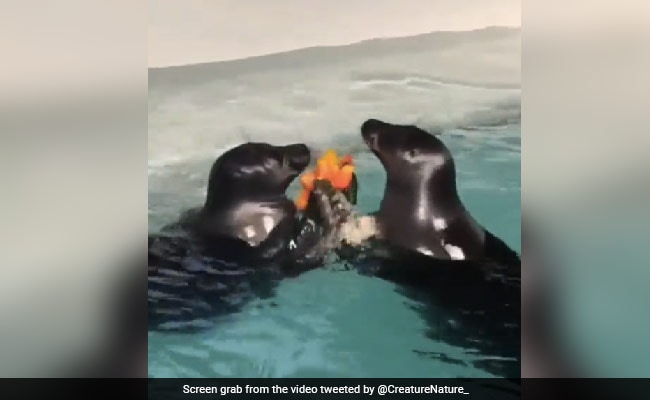 An adorable video of a romantic seal is going viral on the internet. Shared on Twitter by “Creature Nature”, the short clip has received over 4,700 views and hundreds of likes.

The caption of the post read, “He gave her flowers...and she couldn't be any happier."

He gave her flowers...and she couldn't be any happier. 😁💐🦭 pic.twitter.com/u9Gfbz8iDO

The video shows two seals in a pool enclosure. The male seal was given flowers on a string. Seconds into the clip, the male seal is seen grabbing the orange tulips floating in the water and taking them to his female companion. The male seal hands the female seal the flowers with his fins and she wholeheartedly accepts them.

Viral Video | "I Got It": Brooklyn Cyclist Balances Suitcase On His Head

In the video, it is evident that the female seal is absolutely overwhelmed with happiness and love. She is seen spinning around in circles multiple times while holding the flowers with her fins.

Internet users found the video endearing and said that it was really sweet of the male seal to gift his girlfriend flowers. “Even animals know what is love,” said one user. “God knows what is going on in their head, but we keep weaving our own imaginations and believe that they are also experiencing the same emotions as we are. Their behaviour is of course funny and cute, Loved it,” wrote another.

Other internet users simply flooded the comment section with heart emojis and called the video “sweet”.

Meanwhile, in another adorable instance, three North American river otters recently left netizens in awe. A video showing the three creatures frolicking in a bucket of ice took the internet by storm. It showed an otter named Tilly and her two adopted pups, Flora and Hobson, diving and wiggling in the ice.