Several internet users lauded the forest department for the rescue, while others urged covering open wells to avoid risk for children and wildlife. 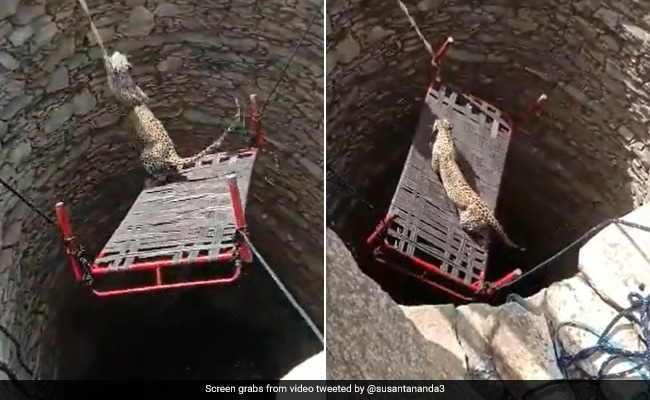 The location of the incident is yet to be known.

Indian Forest Service (IFS) officer Susanta Nanda recently shared a video showing the rescue of a leopard to draw attention to the issue of open wells around animal habitats.

The short clip shows the leopard being lifted from inside the well and leaving the place as soon as he is pulled out. In the caption, Mr Nanda noted that such incidents will reduce if wells around animal habitats are closed. He also took a dig at the old technique of rescuing the leopard and called it the “Mohenjo Daro Harappan technology”.

Another day.
Another rescue of leopard from open well using the Mohenjo Daro Harappan technology.
This will stop only when we close the open wells around animal habitat. pic.twitter.com/kvmxGhqWlf

The location of the incident is yet to be known.

Since being shared, the clip has garnered more than 43,000 views on Twitter. Several internet users lauded the forest department officials for the rescue, while others urged covering open wells in order to avoid risk for children and wildlife.

“This should be taken as a mission mode project, identification, GPS tagging of open wells and covering them from the top with Mild Steel screen or checkerboard local made jali by welding thick MS rods. This will save a lot of hassle,” wrote one user. “Why can't the IFS jointly ask the environment ministry to come upon such changes. They must all come up against some joint issues like this one,” added another.

“The leopard seems to be grateful and went off without harming anyone. Hats off to the forest department,” said third. “I think, this is the utmost kind of professional satisfaction one can get. !! Kudo to the team..!!” wrote fourth.

Meanwhile, earlier this month, another video showing a leopard being rescued from a well had taken the internet by storm. The incident took place in Odisha's Sambalpur district and the rescue operation was conducted by the state Fire Department.

In the clip, the leopard was seen getting hold of the ladder placed into the well by the officials. It then climbed out of the well and escaped into the nearby bushes. The video had cloaked more than 24,000 views on social media.