Since being shared, the video has amassed over 1.3 million likes and over 67,000 likes on Twitter. 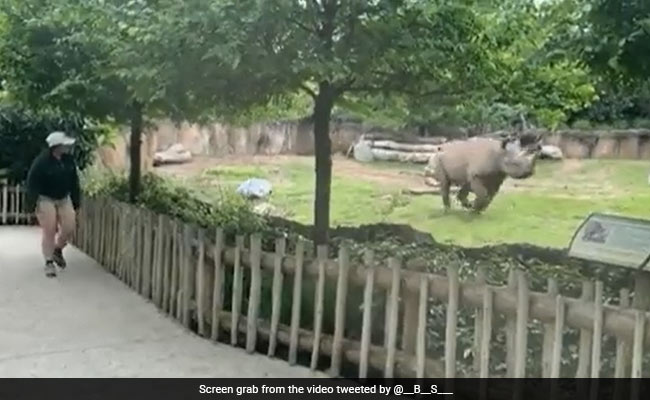 A wholesome video showing the beautiful bond between a rhino and its keeper is going viral on social media and many users are in awe of the same. The now viral video was shared on Twitter by a page who goes by the name B&S on November 11.

In the video, one can notice a rhino standing inside a fenced enclosure. In some seconds, a keeper comes near the enclosure and the animal gets happy seeing her. The happiness can be witnessed as the rhino starts jumping from left to right looking at the caretaker. This moment is too cute to be missed.

Rhino so happy to see his caretaker he gets the zoomies pic.twitter.com/EG6FDvq5tF

The video has been captioned as, "Rhino so happy to see his caretaker he gets the zoomies." Since being shared, the video has amassed over 1.3 million likes and over 67,000 likes on the microblogging site.

Many have called this relationship between the two creatures "adorable." Several users also took to Twitter to leave some heartwarming comments. "Rhino babies are cute," said one user.

"Reminds me of the joy my dog and I felt reuniting after a long day at work!" said a second user.

Another one added, "Something to help you smile."

However, some users also questioned the idea of keeping animals in zoo enclosures.

One user commented, "I have mixed feelings about zoos, but this is adorable."

"As of 2019, there are a little over 1000 rhinos across about 300 zoos. Virtually all of said rhinos are in captivity for a very simple reason: conservation. Yes, thinks belong in the wild. Every animal deserves to have its place in its natural habitat," said another user.

Another person added, "sorry, am a whiner, they  must be out there in the wild with their families...imagine been taken out and be placed in a 1000sqm mansion, staying alone, no visits, no contacts with family. cute video though."