The social media users said the reptile is Burmese python, one of the largest snakes on the planet. 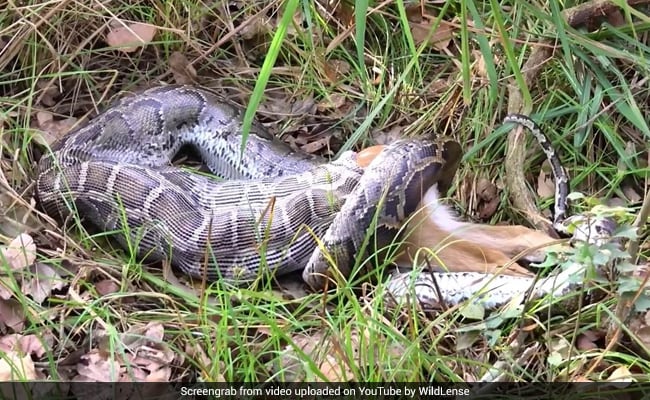 The Burmese python has stretchy ligaments in their jaws that allow them to swallow such big animals.

A video going viral shows a python swallowing a whole deer with seconds. The clip has been shared on Instagram and shows the reptile gulping its prey swiftly, leaving many users in shock. The Instagram handle that has shared the video hasn't mentioned the date or location of the hair-raising clip. Many users pointed out that it is a Burmese python, one of the largest snakes on the planet and also the fact that the video is in reverse. The users said that pythons don't eat that fast.

The Instagram clip has been shared by beautiful_new_pix. It shows a man tapping on the reptile's body as it swallows the deer.

Shocked Instagram users posted a barrage of comments on the video. "I really hate snakes," commented one user. "Oh hell naw...and he pattin it on the back," said another.

However, some users pointed out that the video has actually been uploaded in reverse. "It's in reverse, they don't eat that fast. You see him tapping the snake. That will actually make the snake regurgitate," one user said while commenting on the video.

The video, uploaded a week ago, has received 27,752 likes and hundreds of thousands of views.

Burmese pythons kill their prey by constriction, coiling their bodies around the animal until it suffocates. These huge snakes also possess stretchy ligaments in their jaws that allow them to swallow their food whole.

According to National Geographic, Burmese pythons are carnivores, eating mostly small mammals and birds. But there are some that have been found hunting larger food items like pigs or goats.

National Geographic further said that have been known to attack and eat alligators.