The kind gesture of the police constable has touched the hearts of thousands of internet users. 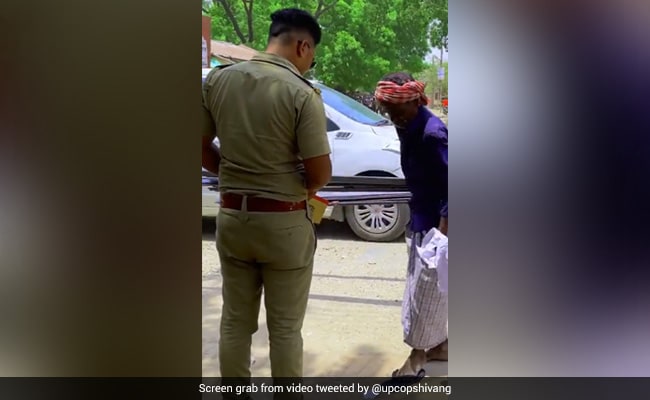 A video showing a police constable giving a pair of slippers to a cart puller walking barefoot on the road has melted hearts online.

The clip was shared on Twitter by Uttar Pradesh police officer Shivang Shekhar Goswami. It shows a cart-puller walking barefoot on the road. Seconds later, it shows a police officer gifting a brand new pair of slippers to the man.

Watch the heartwarming video below:

At the end of the video, the cart puller is seen trying the slipper on and thanking the policeman profusely. “Very nice, commendable work,” read the caption of the post when translated into English.

Viral Video | Fan Makes Portrait Of Dinesh Karthik With Rubik's Cube, Gets A Shoutout From Cricketer

Since being shared, the video has taken the internet by storm. The kind gesture of the police constable has touched the hearts of the netizens. They flooded the comment section with heart emojis and praised the police officer for his generosity.

One user wrote, “Kudos to the policeman.” Another said, “Great Humanity sir. Salute for you.” A third said, “Serving mankind is the greatest form of worship.” “Good to see Humanity still exists,” wrote fourth.

Meanwhile, earlier this month, another UP police constable identified as Sandesh Kumar had been lauded on social media for rescuing an elderly man trapped in a swamp. Mr Kumar had ventured into a swamp and rescued the old man with the help of a rope. The video of the rescue mission had gone viral online.

Netizens praised the constable for his “commendable” job. “Remarkable, the saviour needs to be awarded for his bravery," expressed a user.