"I love how the penguin in front, stops, looks back & waits for the others to catch up..." wrote one Twitter user. 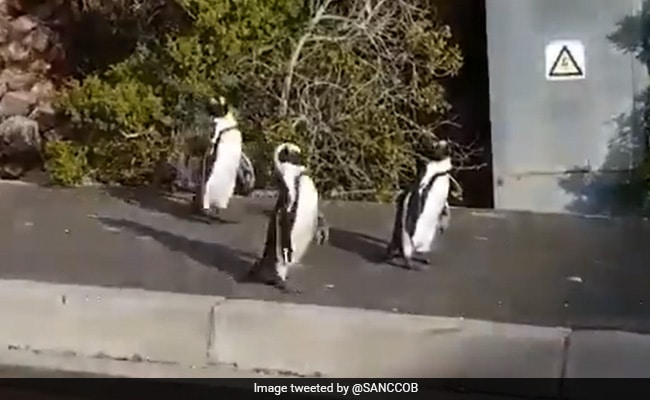 Three penguins were spotted waddling down the streets in South Africa.

Three African penguins took a leisurely stroll down the quiet streets of Cape Town in South Africa as humans stayed indoors during a national lockdown - imposed to contain the spread of the highly infectious coronavirus. On Friday, the Southern African Foundation for the Conservation of Coastal Birds shared a video of the three birds exploring the city on social media, delighting millions of viewers.

The group, which works toward penguin and seabird rehabilitation, said that its rangers took the penguins on a walk around the empty streets of Simon's Town outside Cape Town. Under the watchful eyes of their carers, the birds were seen crossing an intersection and exploring the town.

According to Independent Online, between Simon's Town and Cape Point is Boulder's Beach - a famous penguin colony. Set in the midst of a residential area, it is one of the few sites where the endangered African penguin can be observed at close range.

Take a look at the video of the penguins that is delighting the Internet below:

Since being shared online, the video of the waddling penguins has gone viral with over 2 million views and thousands of 'likes' and comments.

"I love how the penguin in front, stops, looks back & waits for the others to catch up... & then races off again," wrote one Twitter user.

"Beautiful, thanks for sharing. The one in front looks so experienced," said another.

In March, the Shedd Aquarium in Chicago had taken its penguins on a stroll around the facility to meet other animals as it remained close to public due to the coronavirus outbreak.