The clip was shared on Twitter on Tuesday and since then it accumulated more than 216,000 views and over 7,200 likes. 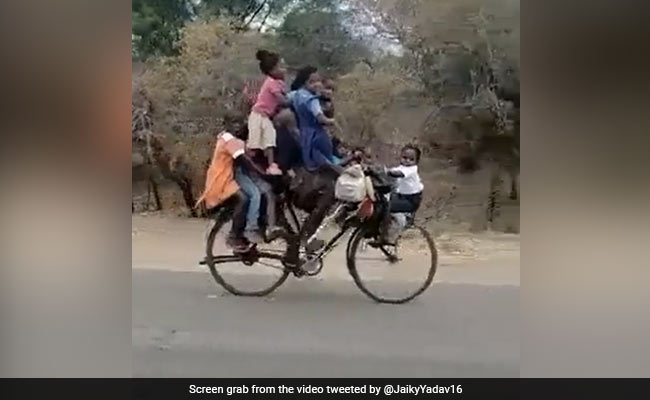 A video of a man carrying nine children on the same bicycle is gaining traction on social media. The short clip was shared on Twitter by a user named Jaiky Yadav, with the caption, "The world's population has reached 8 billion, such humans have contributed a lot in achieving this achievement".

In the video, a man is seen carrying nine children on a bicycle. While three kids are seen sitting at the back of the two-wheeler, one of them is seen standing on top of the others and holding the man's shoulders. Two of the children are also seen sitting on the front bar of the bike and the seventh kid is seen sitting facing the man above the front wheel. The remaining two kids settle in on the rider's arms, holding onto him throughout the ride.

The clip was shared on Twitter on Tuesday and since then it accumulated more than 216,000 views and over 7,200 likes. Internet users flooded the comment section with all kinds of reactions. While some wondered if the nine children perched on the same bicycle belonged to the rider, others pointed out that the population explosion was the fault of people like the bicycle rider.

"Sometimes we have to change the narrative to see things. 1)They might not be all his own kids. 2) They didn't get a public transport facility (as seen in the video rural area)" wrote one user. "Don't judge a book by its cover," said another.

A third commented, "This reminds me of Philips... innovation n u." A fourth added, "I am more interested in Bicycle and Tyre Companies. Real strong...."

"We Made Garbage Mountain Smaller": BJP's Manoj Tiwari To NDTV