Read inOther Languages
This Article is From Oct 16, 2020

Viral Video: Man Swims With Alligator, Then Looks Surprised When It Attacks

"Why would you be in the water with them?" asked one Twitter user. 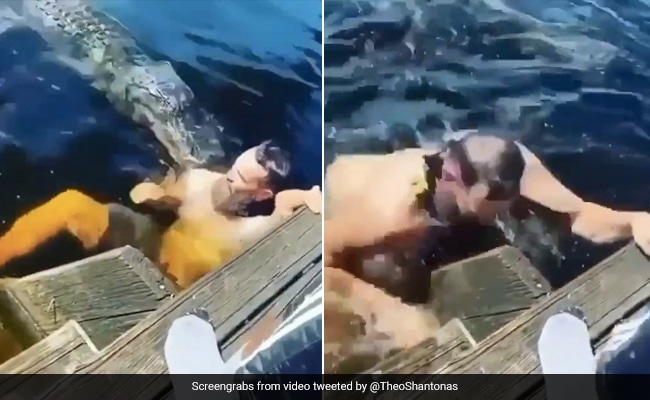 A man swims with alligators in this viral video.

For many travellers, having a close encounter with wild animals is a thrilling experience. Swimming with dolphins, for example, is a popular tourist activity at several places across the world. In the Bahamas, you can take a dip in the ocean with wild pigs, and if you are in Malaysia, you can go swimming with sea turtles. But swimming with alligators? That is not something you hear of every day, given that these predators are not exactly known for their docile or playful nature.

Perhaps this man was feeling especially adventurous when he ventured into the water with alligators. Unsurprisingly, it did not end well for him.

A video that has gone viral on social media shows a man floating in water with two alligators, hanging onto a fishing dock with one arm. The video was reportedly filmed in Florida.

The man initially appears to be having a good time, even smiling as one of the reptiles approaches him. However, his smile quickly turns into an exclamation of shock as the gator bites down on his arm. He screams and scrambles out of water quickly, apparently unhurt but certainly shaken up.

The video was shared on Instagram by music artist Tunde Ednut who captioned it, "Are you mad?" It was also posted on Twitter, where it has garnered a whopping one million views.

Along with a million views on the microblogging platform, the clip has garnered several comments criticising the man.

"Why would you be in the water with them?" asked one Twitter user.

"What did he expect? He is lucky it was just a taste and not a full blown BITE," said another.