Viral Video: Man Rescues One Kitten, Then A Surprise Right After

Ever since the video was posted on Instagram it has received over 300,000 views, with the user even doing several follow up videos. 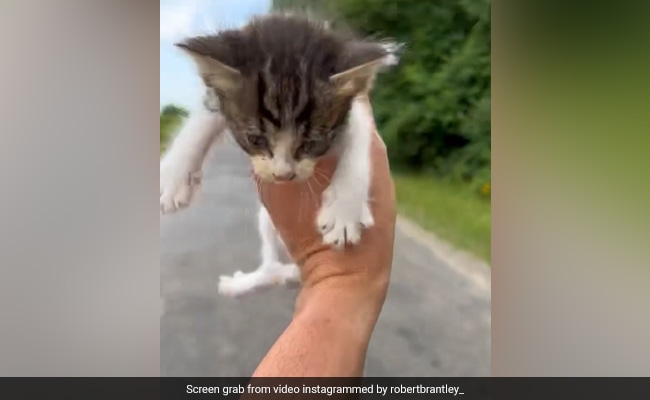 Some of the kittens even hop and seem to be nestling between the users legs.

A video has gone viral on Instagram that shows user Robertbrantley stopping his car to remove a tiny kitten out of the way. Just as he picks up the kitten, the camera pans to a patch of grass off the road which shows many more kittens coming out of the grass, running towards him.

Some of the kittens even hop and seem to be nestling between the user's legs.

Captioning the video, “Left work to go to the range. Passed a baby kitten I knew wouldn't make it through the night and the wife has been wanting a cat for the farm; figured I'd stop and rescue the thing. I backed up to get a short clip and got ambushed my the mob. Anyone wanting a kitten at a screaming price? I'll cut you a deal!”

Ever since the video was posted on Instagram it has received over 300,000 views, with the user even doing several follow up videos.

One of the videos shows all the kittens inside the car along with his equipment. “I've been getting tons of messages and comments about getting the kittens home. I was loaded down from a range trip when I was ambushed. So here is the video of them all in. I wish I would have been in my truck but I was stuck in the gas saver. This model didn't come with the kitten box either. I couldn't keep up with them as I would throw one in and 2 would jump out. So I had to close the door with the window down and funnel em in. That would have been good footage actually,” he said in the caption.

This video too has a lot of views, with social media hailing the user as a saviour to these kittens.