The video caught the attention of not just internet users but also many social media influencers including Prajakta Kohli and Ayesha Kapoor Adlakha. 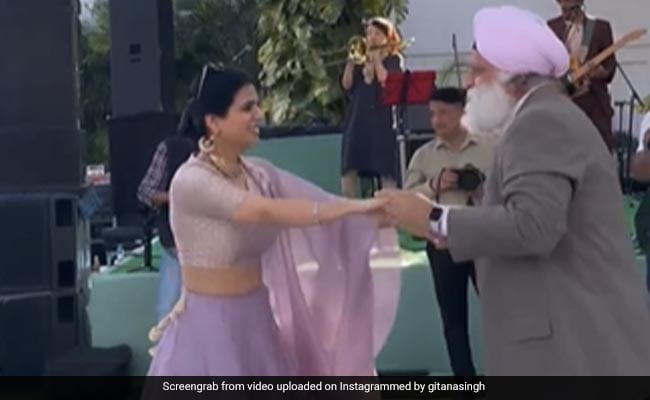 A heartwarming video of a father and daughter dancing to the hit pop number 'Uptown Funk' by Bruno Mars and Mark Ronson is gaining traction on social media. The video was posted by an Instagram user named Gitana Singh. It showed the father-daughter pair indulging in what appeared to be an impromptu jive session.

"Lucky Me," Ms Gitana wrote in the caption of the post, which caught the attention of not just internet users but also many social media influencers including Prajakta Kohli and Ayesha Kapoor Adlakha.

In the clip, the two are seen grooving and setting the dance floor ablaze with their moves. While Ms Gitana is seen dazzling in a stunning purple lehenga, her father is seen complementing her looks with a matching turban and a shirt. Throughout their dance, the father led the performance and swirled Ms Gitana several times on the upbeat music.

Ms Gitana shared the video a few days back and since then it has accumulated more than 25,000 likes and over 563,000 views. Internet users flooded the comment section with heart and lovestruck emojis. While some called the video "beautiful," others called it "overwhelming".

"The dancing family! it's so overwhelming to see uncle making you and aunty dance this well..much love," said one internet user. "missed my dad so much watching this. you guys are beautiful together," added another.

A third commented, "My Monday happiness dose," while a fourth wrote, "This is so heartwarming!"

Meanwhile, speaking of the father-daughter dance, a while back a similar video had taken the internet by storm. In the clip, the bride and her father were seen dancing while dressed in formal wear and sneakers to the Cali Swag District song "Teach Me How To Dougie". The video accumulated an astounding 47.6 million views.