A video has surfaced on the internet showing a frog coolly slithering down a snake's back, without any care in the world. 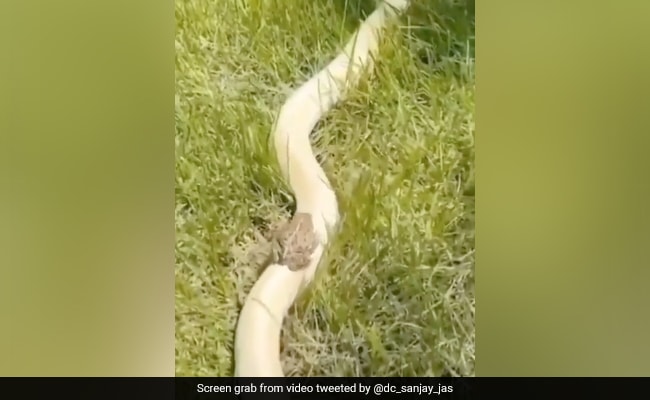 The internet is a treasure trove of interesting and bizarre animal content. That said, it's quite surprising, though not impossible, to see an unlikely friendship between a prey and a predator. In a classic case of "keep your friends close and enemies closer", a video has surfaced on the internet showing a frog coolly slithering down a snake's back, without any care in the world.

The video was posted on Twitter by Sanjay Kumar, with a caption that reads, "Courage does not mean the absence of fear, but courage is the courage to face fear in front of you..!''

The ten-second-long clip shows a little frog hitching a ride on the back of a snake. As the snake slowly crawls on the grass, the frog is seen slithering on its back, as if enjoying the ride.

The strange clip has garnered over 12,000 views and close to 600 likes since being shared. While some social media users were left stunned, others were curious to know more about the unlikely friendship. Many also cracked jokes and hailed the frog's courage.

One user wrote, "Sometimes it's okay to adventure.'' Another commented, "Fully Confident.''

Such unlikely friendships, though surprising, are not that rare. Earlier this year, floods in the Australian state of Queensland forced several animals - a snake, frog, and pair of mice - to work as a team to survive, according to anIndependent report.

In a video that had gone viral, a frog, two mice, and a beetle were seen sheltering aboard a snake inside a rainwater tank in western Queensland. More astonishing was the fact that the reptile in the video was found to be an eastern brown snake, which typically preys on mice and frogs.