The 14-second clip shows a sea of ducks on an unnamed road around a white MPV-type vehicle and the driver is not able to move at all. 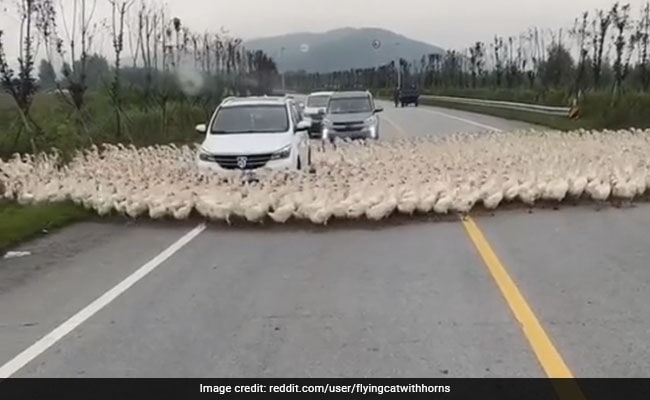 The traffic is stopped by hundreds of ducks on the road.

Traffic is unusually heavy on Mondays, when offices open after a gap of two days. People often get late in reaching office because of the heavy flow of traffic. But one person got stuck on road because of very funny reason. His car was surrounded by hundreds of ducks, who even stopped the entire traffic on the stretch of the road. The video has been posted on social media platform Reddit where it is going viral. The video has received more than 65,000 upvotes.

The 14-second clip shows a sea of ducks on an unnamed road around a white MPV-type vehicle and the driver is not able to move at all. The location where it has been shot is also not known. Some cars are seen waiting behind the white car, as the entire stretch of the road is full of ducks.

The waterfowls are moving around the car, not letting it move an inch.

The video has been recorded by a person sitting inside the car that is in front of the white car.

""Why were you late today?" "It was the ducks, sir"," one Reddit user commented.

"The Duck Council has spoken and judgment has been passed," said another.

The user who posted the video asked "duck experts" to explain the phenomenon.

"Not a duck expert but it looks like each duck is just following the one in front of it, which leads them all in a circle," one user replied.

Last week, the police in California rushed to a zoo after receiving a 911 call that got disconnected, before realising that it was made by a monkey.

The police said that a Capuchin monkey at the zoo - named Route - had apparently picked up the zoo's cell phone that was left abandoned in a golf cart.