A video doing the rounds on the internet shows a giant yellow anaconda wrapping itself around a Caiman, a sub-species of alligator, in Brazil. 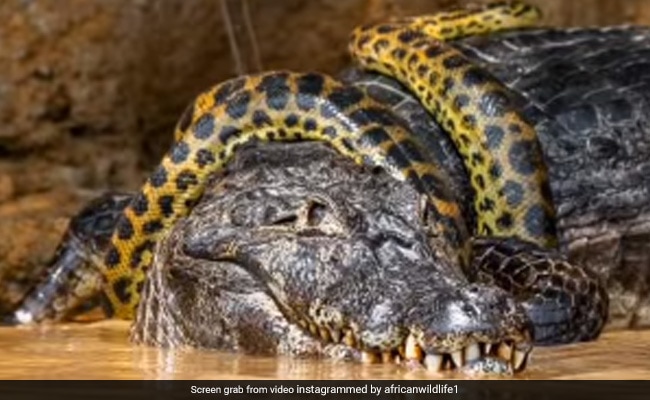 Anacondas portray the titular snake as a massive and fearsome creature. They are huge in size, with green anacondas growing upto 30 feet in length. A member of the boa family, they can weigh up to 550 pounds, which is equal to 11 schoolchildren. So, when these scary creatures come out to hunt, the sight can send shivers down your spine.

A video doing the rounds on the internet shows a giant yellow anaconda wrapping itself around a Caiman, a sub-species of alligator, in Brazil. The incredible sight was captured on camera by Kim Sullivan from Indiana in the United States in September last year and has now gone viral.

The video shows the struggle between the crocodile and the snake along the banks of the Cuiaba River, which lasted for 40 minutes, according to Ms Sullivan.

The crocodile is seen struggling to breathe as the anaconda constricts it more and more. The photographer, who witnessed the whole struggle, previously wrote on social media that the Caiman went under the water to free itself and the tip of anaconda's nose struggling to get air.

The crocodile came up after some time but the giant snake was still seen strangling it, said Ms Sullivan. So, it went under again for a long time and came back free. The anaconda too came up on the riverbank and slithered back into its hole, she added.

The video has now been shared by Africa Wildlife1 on Instagram. "It's not a Python, It's not a Boa Constrictor.....it's the biggest of them all: The Anaconda," it said in the caption.

Since being shared on Friday, the video has received over 1 lakh views and around 5,000 likes.

Users can be seen asking about the winner in the massive fight in the comment section.

"Who won?" asked a user while another said, "Snake will never swallow the gator."

Users found the fight amazing and predicted what could be the end results of the fight.

"I'm going with the croc. There's no way the anaconda is getting that big a croc in its mouth," commented a third user.

Recently a video went viral showed an anaconda leaping out of the water and biting a Brazilian fishing guide. The video showed 38-year-old Joao Severino and other occupants of a boat narrowly escaping the female anaconda.