The bald eagle was freed from octopus' grip by the efforts of the fishermen. The squid had attacked the eagle after the bird tried to attack it. 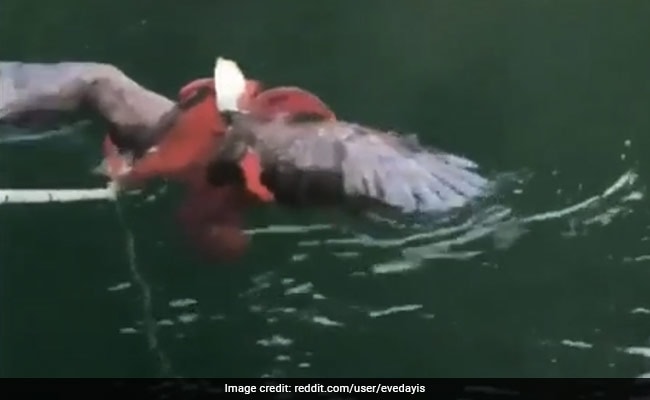 The bald eagle is seen in the tentacles of the octopus.

A hair-raising video is doing the rounds on the internet that shows a bald eagle caught in the clutches of a large octopus. The footage is old, and was captured by a group of fishermen in Canada's Vancouver in 2019. It shows the eagle struggling to free itself from the tentacles of the octopus in a water body. According to CNN, the fishermen were heading home when they heard the eagle's cries and saw it struggling against the squid. Since being shared again on Reddit, the clip has received more than 45,000 upvotes.

The Guardian said in a report that the octopus caught the bird of prey as it tried to attack it. The fishermen were initially apprehensive of intervening in the fight, but ultimately decided to step in and slowly "peeled the octopus off".

They pulled both the animals towards their boat with the help of a stick and released the bird from the squid's tight hold. As the video ends, the bald eagle is seen sitting at the base of a tree while the octopus is pushed to the base of the water body.

Bald eagles are protected species in the United States under the Bald and Golden Eagle Protection Act, the Migratory Bird Treaty Act and the Lacey Act.

Octopuses are fascinating creatures, and always surprise people with their unique and extraordinary abilities. They not only help octopuses fight predators but also keep them safe in adverse situations.

Earlier this month, a viral video on social media showed the incredible ability of an octopus to change colours according to its surrounding.

The 23-second video showed the cephalopod moving around the sea bed and changing the colour of its skin according to the fauna around.