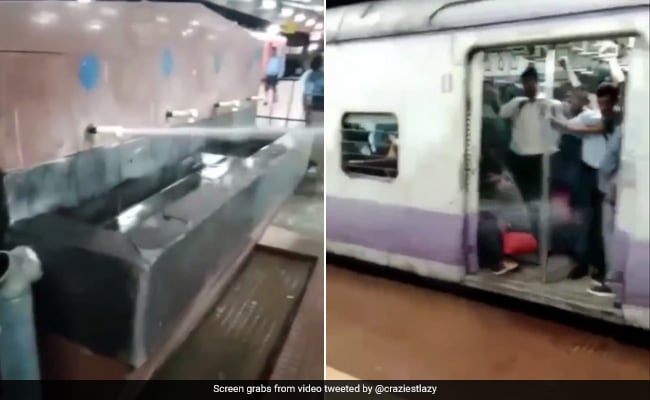 The location and time of the incident are yet to be known.

A hilarious video from a railway platform where a broken water tap offered "free showers" to passengers is going viral on social media. The short clip was shared by a Twitter user named Abhy on Wednesday. It showed a broken tap water ejecting water splash towards an approaching train and drenching the occupants inside.

"Indian railways at your service," the caption of the post read, which amassed over 1.1 million views and more than 26,000 likes.

Indian railways at your service 😂 pic.twitter.com/fEL65NFjHs

In the 30-second footage, water can be seen spurting out of the broken tap in full force like a cannon. Moments later, as the camera panned towards an incoming train, passengers standing near the door of the passing local train were seen getting startled and rushing inside to avoid getting drenched.

The hilarious part in the clip, which left several internet users also chuckling, was that the passengers on the train were unable to escape the wrath of the broken tap. If one goes by the ER (Eastern Railways) written on the train, this could be any station in West Bengal.

In the comment section, internet users sarcastically praised the "special service" provided by Indian railways. One user jokingly said, "Even Railways know that many have not taken bath in the morning. Hence helping". Another wrote, "That's auto cleaning system".

A third commented, "That system is AI enabled, the AI detects thirsty passengers and makes the water available directly thru the window. It's fed directly to the mouth so that it's not contaminated by human touch. High techie techie!!" A fourth added, "auto cleaning services for trains".

The time and date when this incident took place is yet to be known.