Internet users were simply left amazed by how fast the white dress changed colour under the sunlight. 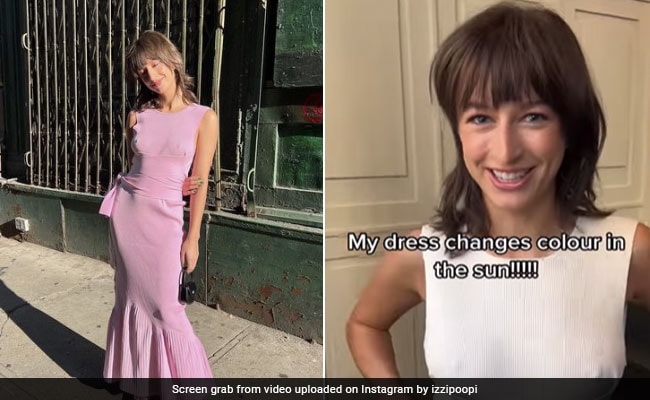 The video garnered more than 24 million views and over 2 million likes.

Fashion can go either way. It can either tempt you enough to pick up your scissors and manipulate old clothes or it can make your eyes roll. Now, in today's trend of unusual fashion, a video of a dress that changes colour under the Sun is gaining traction on social media.

Internet user @izzipoopi shared the clip a few days back on Instagram. In the video, she was seen wearing a white dress and saying, "Guys, remember my skirt that changes colour? This changes colour too," pointing to her dress. "Let's go in the sun," she added, before walking out into the Sun.

Once the woman walked out in the daylight, her white dress was seen instantly changing colour to a beautiful pink. In the video, she was heard saying, "It's pink now.. Not for long.. Science".

@izzipoopi also shared a series of photos on Instagram, with the caption, "The dress that's secretly pink".

Since being shared, the video has taken the internet by storm. It has garnered more than 24 million views and over 2 million likes. In the comment section, internet users were simply left amazed by how fast the white dress changed colour under the sunlight.

"No waaaay!!!! This is the coolest thing I've seen!!!" wrote one user. "Wow this is literally so incredible," said another.

"Woah I was not expecting such a drastic shift in colour," commented a third, while a fourth added, "This is insane".

Meanwhile, the woman did not reveal what exactly the dress was made of, however, several internet users explained the science behind it. "The colour change of Hypercolor shirts is based on combination of two colours: the colour of the dyed fabric, which remained constant, and the colour of the thermochromic dye," said one user.

Thermochromic inks or dyes are temperature-sensitive compounds, which were developed in the 1970s. It is likely that the dress is made out of a mixture of these fabric dyes that temporarily change colour with exposure to heat.