Viral Video: Boy Does Bhangra In Front Of Dogs. Their Reaction Is Hilarious 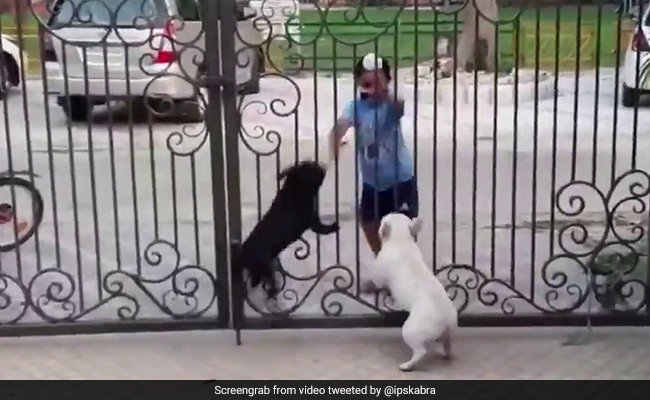 A boy does bhangra. Two dogs join him in this viral video.

A little boy was filmed showing off some stellar bhangra moves to a couple of dogs. While the child's talent on the dance floor - or the road, in this case - impressed many, it was the reaction of the two canines that got the most laughs.

In the video which has gone viral on Twitter, the young boy can be seen standing outside the gate of a house with two dogs inside. The video appears to have been filmed from someone inside the house. It shows the child performing some energetic bhangra moves for the benefit of the dogs, who were filmed jumping up excitedly. As the boy paused his dancing, so did the dogs - though their barking continued. Then, as he started performing again, the dogs were filmed jumping again, eager to join the mini dance party.

The hilarious video was shared online this Sunday by IPS officer Dipanshu Kabra, who tweeted it saying that he "loved it".

Another version of the same video has garnered a whopping 1.8 million views on the microblogging platform. In the comments section, many praised the young boy and his dancing skills. Others were amused at the reaction of the dogs.

"Open the gates. Let these cuties dance with him," wrote one Twitter user.

"Is he training them how to do bhangra?" another asked, while a third person remarked: "Such a PURE and fun video."