The video was recorded in 2021 when Antoine Moses created a record of planting the most trees by an individual in 24 hours. 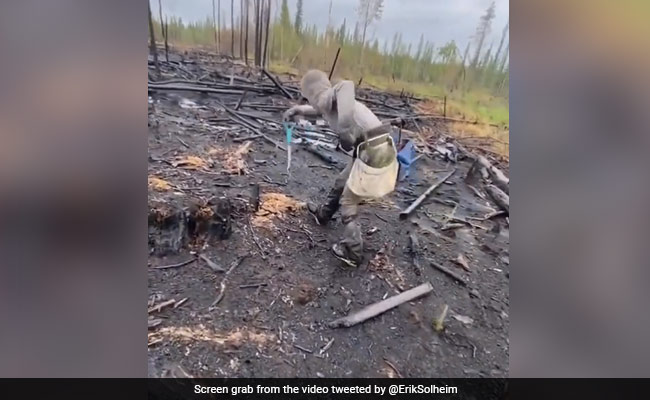 An old video of a 23-year-old marathoner is going viral on the internet for all the right reasons. In his efforts to conserve the planet and minimise the effects of climate change, the Canadian man is reviving forests by planting thousands of trees.

The video was shared by Erik Solheim, Diplomat and Former Minister of Climate and the Environment of Norway on Twitter. The 15-second video was captioned as, "WOW! A 23-year-old tree planter from Quebec set a new world record by planting 23,060 trees in 24 hours. Antoine Moses says he can plant 16 trees per minute, or one every 3.75 seconds." In the short clip, the man can be seen bending, digging holes and then planting saplings.

Antoine Moses says he can plant 16 trees per minute, or one every 3.75 seconds..

The video was recorded in 2021 when Antoine Moses created a record of planting the most trees by an individual in 24 hours. As per the website of Guinness World Record, "The most trees planted by an individual in 24 hours is 23,060, and was achieved by Antoine Moses (Canada) in La Crete, Alberta, Canada, on 17 July 2021. Antoine has been planting trees for six years."

Many internet users were left impressed by the marathoner's bid to curb deforestation. So far, the video has amassed 1.7 million views and over 1,800 views.

Reacting to the video, one user commented, "Amazing effort and dedication by Antoine Moses. To ensure #soilhealth, carbon sink and a healthy atmosphere, we definitely need more trees! #SaveSoil"

"This is real climate responsive activism. No fancy speech at world summits, no placards, no op-ed, just climate action. Role modeling is a better (and actually effective) way to inspire people for #ClimateAction," added another user.

"Wonderful to hear and see this kind of record-breaking work. How many of these trees will actually grow big, healthy and survive too should be tracked, after the planting," commented a third.