He personally dropped off eight students in his patrolling vehicle 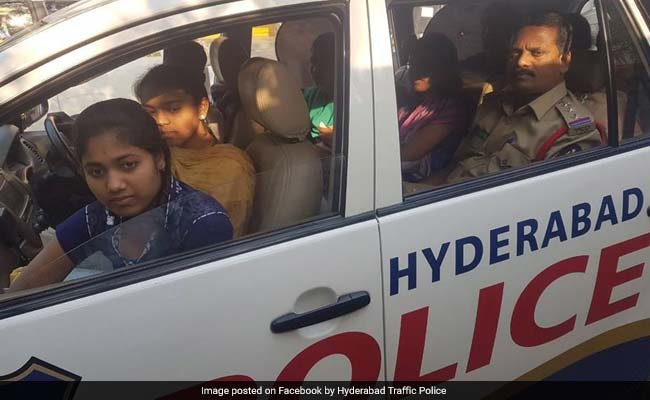 New Delhi: A Telangana police officer is earning some well-deserved praise on social media for his timely help to a group of stranded school students.

About 40 intermediate students from Mahendra Hills Government Junior College in Hyderabad found themselves stranded on the road when the bus they were travelling on broke down on Wednesday. The students were headed for their first intermediate board exam when their RTC (Road Transport Corporation) bus broke down near a police checkpost in Secunderabad, barely two kilometres from the exam centre, reports Times of India.

Worried about missing their exam, the nervous students along with their warden began looking for autorickshaws to get to the centre. While most of them managed to ferry rickshaws to the exam hall, eight students were still stranded, reports The News Minute.

This is where inspector A Srinivasulu came to their rescue.

When the inspector from East Marredpally police station in Secunderabad spotted the students in need, he offered to drop the remaining eight to the exam centre in his patrolling vehicle. A photo of the uniformed inspector and the students inside the police vehicle is now viral on social media.

Shared on Facebook by Hyderabad Traffic Police, the moving image has collected 3,400 reactions in just under 24 hours.


"Earlier, they were bit hesitant because it's a police vehicle but all of them adjusted in it when I promised to drop them on time to their examination centre," Inspector Srinivasulu told Deccan Chronicle.

According to The Times of India, the eight students reached the centre a few minutes late. But, upon the cop's request, the authorities let the students in.

"We try our best to help out people. That is our duty after all. Personally, I have served for 22 years in Hyderabad and this is the least I could do. We don't help people to be in media, do we? I did what I would do for my daughters," he told the Times of India.

Social media was all praise for the helpful cop.

Promoted
Listen to the latest songs, only on JioSaavn.com
"This (sic) type of incidents increase hope and confidence on cops.. Good job done sir," read a comment on Facebook.

"Great Job Sir. Very considerate. Please keep it up. Kudos to the team on the ground who thought of this," read another.Click for more trending news