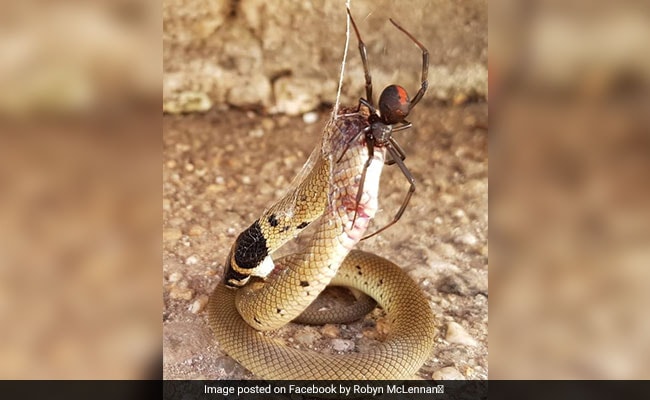 Redback spiders are a species of highly venomous spiders.

A redback spider emerged as the unlikely victor as it battled a venomous eastern brown snake. Facebook user Robyn McLennan came across this terrifying sight in Victoria, Australia last week. Robyn posted the pics of the spider taking on the snake to a Facebook group called Field Naturalists Club of Victoria, where they quickly went viral.

Eastern brown snakes are the world's second most venomous snakes, while redback spiders are a species of highly venomous spiders.

Three photos shared by Robyn show the redback spider, also known as the Australian black widow, trapping the snake in its web. Even more surprisingly, the spider managed to lift the serpent off the ground completely, suspending it mid-air.

Sharing the pics, Robyn wrote: "The spider has now brought the entire snake off the ground and it is suspected mid air, just under the lower lip of the tank."

The series of three photographs has collected over 1,000 'likes' and a ton of amazed reactions.

"Amazing, I would love to see some sequences photos of what happened next," wrote one person in the comments section. "That's a pretty big snack for a small spider," another marvelled. "Horribly fascinating," a third said.

According to Brisbane Snake Catchers, redback spiders kill their prey by injecting a complex venom called alpha-latrotoxin from its two fangs, before wrapping it in silk.

Sharing a picture of the deadly battle between the spider and the snake, they wrote: "Many people would think this would be an unlikely event, but it is a fairly common occurrence, just not witnessed by the public often. All animals are opportunistic feeders, as in they'll eat what they can, to survive."

According to Star Weekly, snake catcher Jarrod Bingham was called last Monday to identify and collect the snake.

"The redback spider was inside the brown snake's mouth and just crawled out," he said.

This isn't the first time a redback spider has come out on top in a fight with a snake. A similar incident occurred in 2017, and it was caught on a video that went massively viral.