"Made my day," wrote one Twitter user, sharing a pic of the BART pony 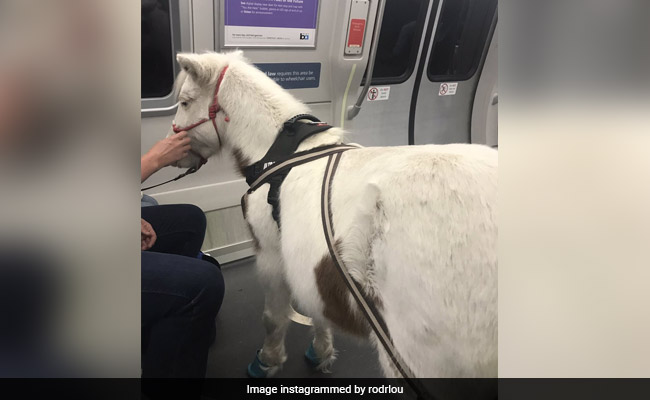 A horse was spotted riding a train on Tuesday, much to the delight of its co-passengers.

A little horse drew big smiles when it was spotted riding a train on Tuesday afternoon. The equine passenger took a trip from the Oakland station in California to San Francisco, much to the amusement of its co-passengers.

The miniature horse was allowed to ride the Bay Area Rapid Transit (BART) train as it was a service animal. Mercury News reports that the horse, named Sweets, boarded a train at Rockridge station after its owner showed paperwork to a station agent stating it was a service animal. After a consultation with BART lawyers, the horse was allowed onboard.

It quickly became the highlight of the day for many passengers. "MADE MY DAY! So cuuuttttteeee!" wrote one Twitter user who snapped a picture of the white and brown mini horse.

MADE MY DAY! So cuuuttttteeee!
Is it bring your miniature horse on BART day? pic.twitter.com/dx0Zs9Q5Dm

Another photo of Sweets on the train has gone viral online, collecting more than 5,800 'likes' and a ton of comments. "BART had a major delay tonight but I would do it all over again if I could see this pony," wrote one Twitter user in response to the cute pic.

Sweets was also spotted interacting with other passengers on the train

Only in the Bay Area. photo by Erin Kelly. pic.twitter.com/rnPIIhfX8b

Sweets the #BARTpony is looking for sponsors.

New shoes for safe travel, for example & other gear. pic.twitter.com/6nKfUUfAo9

Got this snap chat from my friend @carolinedooley glad to see this Bay Area pony making the rounds. pic.twitter.com/ESJ26peVhP

This isn't the first time that a horse on a train has grabbed eyeballs. Last year, photos of a man in Austria trying to board a train with two horses had gone viral online.