Viral: Man In Wheelchair Speeds Down Busy Road By Holding Onto Truck

In the video, the wheelchair-bound man is seen holding onto the truck with his right hand as they speed down the road 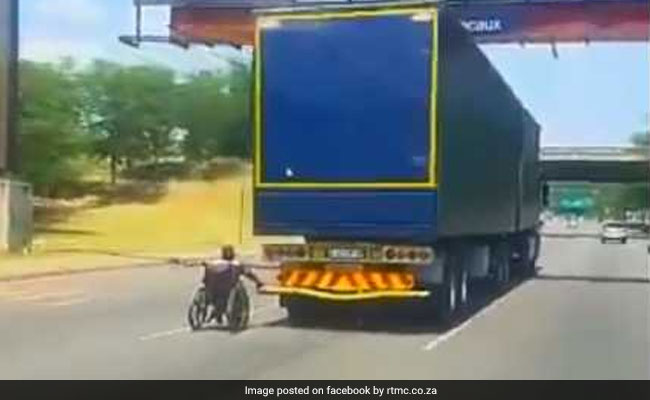 A wheelchair-bound man stunned viewers by 'hitching' a ride in an unusual way.

A man in a wheelchair recently left onlookers stunned when he 'hitched' a ride on a busy highway by holding onto a truck. A video of his stunt has now gone viral on social media. The incident occurred near Pretoria in South Africa, according to Fox News.

In the video, the unidentified man is seen holding onto the truck with his right hand as they speed down the road. As per The South African, that in itself was no easy feat, given that the truck was moving at around 60 to 80 km/hr in the centre lane of a busy highway. In one scary moment right before the clip ends, the man expertly pushes himself away and manages to go his own way.

I gave up, this country needs more than lukau's resurrection pic.twitter.com/Obq4Ve81nE

Since the video surfaced online, it has been shared and re-shared hundreds of times, collecting thousands of views in the process.

He even used side mirror before changing lane

While it is not clear who the man is, some netizens suggested that the man is a regular speedster around Pretoria.

I know this guy from Salvokop pta

However, while the video may have amused netizens, South Africa's Road Traffic Management Corporation denounced the stunt in a Facebook post. "In a country where we lose close to 14 000 people annually as a result of road crashes this is totally unacceptable. We condemn this dangerous behaviour," they said.