What social media is saying about Vijay Mallya's arrest and bail 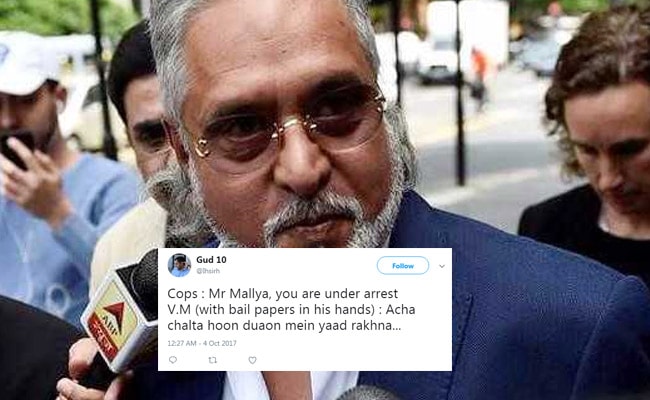 If the news of Vijay Mallya's arrest and swift bail in London yesterday gave you a strong sense of deja vu, you're not alone. The liquor baron was arrested and released on bail for the second time this year in a case of money laundering filed by Indian authorities through UK's state prosecutor. The first time was on April 18, when Mr Mallya was granted bail within hours of his arrest by the Scotland Yard. And much like last time, this time too, Twitter erupted with jokes as soon as news of Mr Mallya's bail came out. We compiled some of the funniest tweets for you to see.

Here is what Twitter is saying about Vijay Mallya's speedy bail:

It's faster than the speed of light

Teacher: What's faster than the speed of light?

Even faster than bullet trains

*KBC*
Ques-
Which of these things is the fastest?
1 F1 pit crew
2 Dhoni's stumping
3 Bullet train
4 Mallya getting bail

And much, much more

Vijay Mallya got arrested when I was at Sakinaka signal.

Vijay Mallya got bail and I was still stuck at Sakinaka.

Which one made you laugh the hardest? Let us know using the comments section below.Click for more trending news