"She walked almost all the way from the tail to the emergency exit row, opened the door and went out." 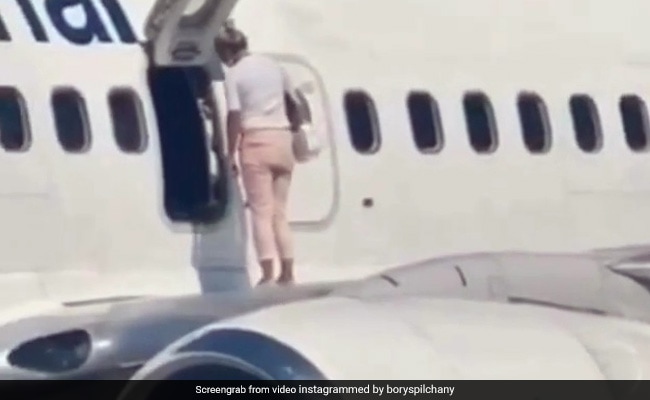 A woman in Ukraine walked out onto the wing of an airplane.

A woman in Ukraine has been blacklisted from flying after she walked onto the wing of an airplane, complaining about the heat. Ukraine International Airlines said the woman "opened the emergency exit and went on to its wing" after landing in the Ukrainian city of Kiev, reports The Sun. The mother-of-two reportedly complained about feeling too hot after arriving in the city from Turkey.

To beat the heat, she opened an emergency exit on the Boeing 737-86N and climbed onto the wing 'to get some air'.

According to Ladbible, another passenger on the flight said: "The aircraft landed and almost all the passengers got off. She walked almost all the way from the tail to the emergency exit row, opened the door and went out

"By that time her two children were outside the plane and standing right next to me. They were surprised, saying: 'This is our mum'."

Footage that has gone viral on social media shows the woman walking casually out onto the wing of the airplane.

"The passenger was blacklisted for gross violation of aviation safety rules and behaviour on board," UIA said, according to The Sun. The airline has also demanded that the woman be made to pay a high fine.

The woman was unable to provide an explanation for her actions, besides saying that she felt too warm inside the aircraft. Tests show that she was not intoxicated.