Over 2.3 million views for this video - and counting. 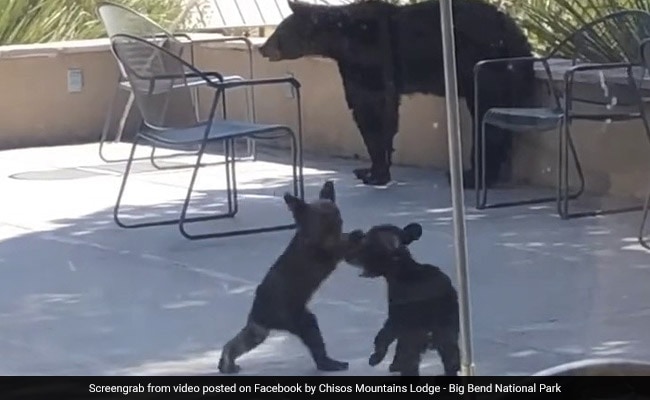 Two bear cubs were filmed fighting each other in a viral video.

While videos of animals being cute make for a good stress-buster, there's something very relatable about this clip of two little bear cubs wrestling it out (relatable at least for people who have siblings). The hilarious video of the bear cubs fighting much like the way human siblings do has gone viral on social media, amusing millions of viewers.

Captured at USA's Big Bend National Park in Texas, the video shows the bear siblings pushing, pulling and chasing each other as an adult - possibly their mom or dad - keeps a watchful eye. While much of the 41-second video focuses on the two playful bear cubs, the camera pans to show a third one hiding in a bucket during the last few seconds in a moment that had viewers gushing in delight.

The video was shared last Thursday on Facebook by Chisos Mountains Lodge, a hotel that lies within the national park. Take a look:

Since being shared on Thursday, the video has collected a whopping 2.3 million views and 32,000 'shares', along with thousands of amused comments.

"Absolutely beautiful creatures. Momma's just watching, little guy in the bucket so cute," wrote one person in the comments section.

"Looks like mum is taking a break in the shade while the youngsters play awhile. Beautiful," said another.

The video also made it to Twitter, where biologist Joe Hanson branded it one of the greatest things to happen during lockdown.

One of the greatest things that has happened as a result of this pandemic is these black bears wrasslin' on the patio of Big Bend National Park basin lodge because all the humans are gone pic.twitter.com/rWkqqzjN1b

It also reminded many of their own playful fights with siblings:

Recently, a video of a bear cub swimming with a plastic jar on its head had also gone viral. The bear cub was rescued by a family out on a boating trip.