The athletes were in Gujarat's capital for the opening ceremony of the 36th National Games. 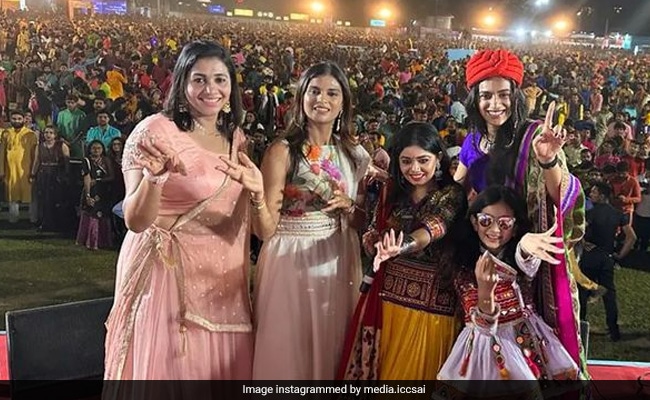 Thanks to the Navratri week, the internet is filled with videos of people doing the Garba. After India's Olympic gold medallist Neeraj Chopra, two-time Olympic medallist player PV Sindhu along with Indian long jumper Anju Bobby George and former Indian shuttler Trupti Murgunde shook a leg with their fans while participating in a Garba night in Ahmedabad.

The athletes were in Gujarat's capital for the opening ceremony of the 36th National Games. In a video shared by Sports Authority of India on Instagram, the trio were seen having a gala time while dancing to the Garba beats. Along with the video, the caption read, "It's GARBA night for @pvsindhu1 Scintillating SINDHU clicked amidst #navratri2022 celebrations in Ahmedabad. Look at her enjoying Garba with ace athletes @anjubgeorge and @trupti.murgunde."

A post shared by Sports Authority of India (@media.iccsai)

Social media users loved the enthusiasm of the athletes at the Garba ground. A user wrote, "Women's of culture." The video has garnered 1,31,000 views with 3,026 likes.

On Wednesday, India's Olympic gold medallist Neeraj Chopra attended a Garba event in Gujarat's Vadodara. He was given a grand reception and the excitement of the crowd was palpable. He was seen doing the Puja before performing a Garba dance with some of the members at the event.

Navratri, the festival of nine nights, started on Monday. During this time, devotees worship the nine forms of Goddess Durga and seek blessings for the well-being of their families. Garba and Dandiya are popular dance forms performed in Gujarat and other parts of India during Navratri.

Videos of Garba performances have become a common sight this week.