Black panthers are found in several states of India. 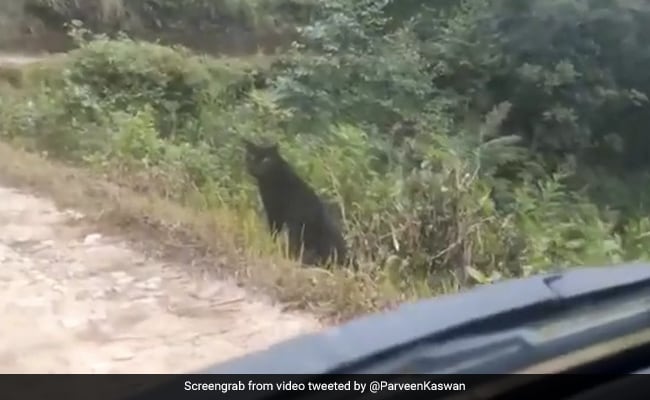 An elusive black panther, somewhere in a forest in India.

A video of a black panther roaming in a forest is going viral on social media. The video was filmed somewhere in India, although the exact location has not been disclosed.

The clip in question was shared on Twitter by Indian Forest Service officer Parveen Kaswan, who said it was forwarded to him by staff at the forest. Mr Kaswan withheld the exact location of the black panther, possibly to prevent poachers from reaching the spot.

The term "black panther" is an umbrella term that refers to the 14 species of wildcat that can have melanism, according to the National Geographic. The term is most commonly applied to melanistic leopards.

"The black panther of India. Location will not be revealed. Forwarded by staff," wrote Mr Kaswan while sharing the video, which shows the black big cat sitting by the side of a road. The black panther turns to look at the people filming it from inside a car before walking a few steps and stopping again.

The black panther of India. Location will not be revealed. Forwarded by staff. pic.twitter.com/q2fXW8Et3e

The video has been viewed over 1.65 lakh times since being posted on the microblogging platform over the weekend.

"So graceful," wrote one person in the comments section, while another said, "What a beauty."

Several people also asked the IFS officer to remove the audio, as people could guess the location from the language being spoken.

In the comments section, Mr Kaswan explained that black panthers are found in several states of India. "Black panther is found in many states in India. It is melanistic common leopard only," he wrote.

"The idea is not to reveal exact location. Otherwise people are aware about where this animal is found. There are number of PAs in India where black panther is present," he further added.