Watch: Man Reunited With Son Who Was Abducted 24 Years Ago 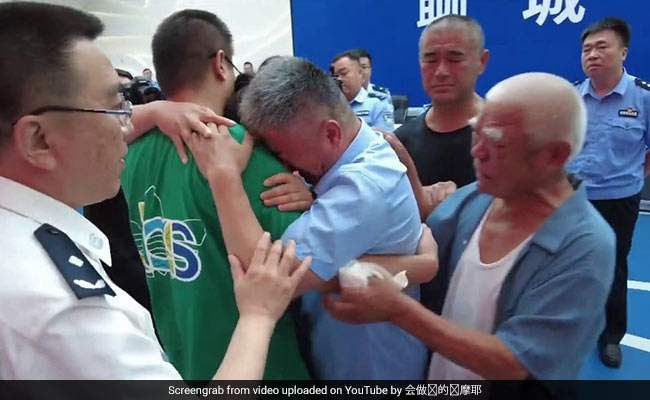 Guo Gangtang was reunited with his son after a 24-year search.

A man has been reunited with his son 24 years after he was abducted from right outside his house in China's Shandong province. Guo Gangtang's son was snatched by human traffickers when he was just two-years-old, reports BBC. After the abduction, Mr Guo spent 24 years searching for his son, travelling more than 5 lakh km across the country on his motorbike. On the bike, he put up two banners showing a photo of his son, Guo Xinzhen. The relentless search attracted widespread media attention and even inspired a 2015 movie starring Hong Kong superstar Andy Lau.

It was a reunion nearly a quarter of a century in the making when father and son met in front of a police station on Tuesday. According to The Guardian, the Guo family's moving reunion was reported across the country. Mr Guo and his wife were seen tearing up as they hugged their son.

"Now that the child has been found, everything can only be happy from now on," Mr Guo, 51, told reporters.

China's Ministry of Public Security announced on Tuesday that two people had been apprehended in connection with the 1997 kidnapping case. Police used DNA testing to track and confirm the son's identity, the Ministry said.

The suspects - a man surnamed Hu and a woman surnamed Tang - snatched Mr Guo's son after they spotted him playing alone outside his home. The couple took the child to the neighbouring Henan province and sold him there.

Child abduction is a huge problem in China, where thousands of children are snatched every year, reports BBC. 2015, In 2015, it was estimated that 20,000 children are abducted every year in China and sold into adoption.

"Tired Of Upper Management": Staff At This Burger King Resigned All At Once