A viral video shows the lion inside the school building. 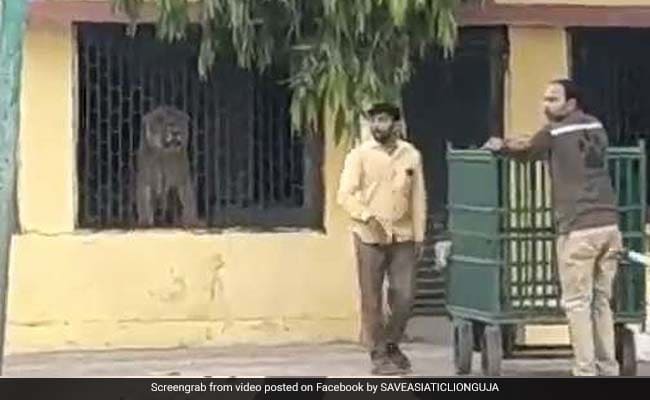 A lion was filmed inside a school building in Gujarat.

A lion searching for food entered a primary school building in Gujarat recently. A video shared on Twitter by Indian Forest Services officer Susanta Nanda shows the lion inside the school building in Paswala village on Wednesday morning. The big cat was later tranquilised and rescued from the building by forest department officials.

According to the Indian Express, the fully grown male lion had been attempting to prey on cattle kept in a shed next to the school. When the cattle-owner woke up and raised an alarm, the lion escaped the shed and sneaked into the school building though a hole in the wall. The incident took place in the state's Gir Somnath district.

Once informed of the lion's presence by villagers, forest department officials began their rescue operation by sealing all exits to prevent the lion from escaping. They then tried placing a trap cage in front of one of the doors to capture the big cat - a strategy that remained unsuccessful as the lion managed to climb upstairs. It was finally tranquilised and taken to Jasadhar animal rescue centre, from where it was released back into the wild.

"Lion comes to school to get himself enrolled," wrote Mr Nanda while sharing a video of the lion roaring at two officials through a window.

Lion comes to school to get himself enrolled????

lion entered a primary school building in Una village in Somnath https://t.co/ScNHtBEvhb was captured & released back in the forest. pic.twitter.com/jB58IMkjiE

Since being shared on Twitter, the video has been viewed nearly 4,000 times. It has also collected thousands of views on other social media platforms like Facebook.

Nobody was injured in the incident. According to Times of India, Gir Somnath district has around 60 lions who frequently prey on cattle. Villagers are compensated for loss of cattle by the forest department.