13 to 14-year-olds from an American football team joined forces to rescue accident victims. Scroll down to watch their incredible effort 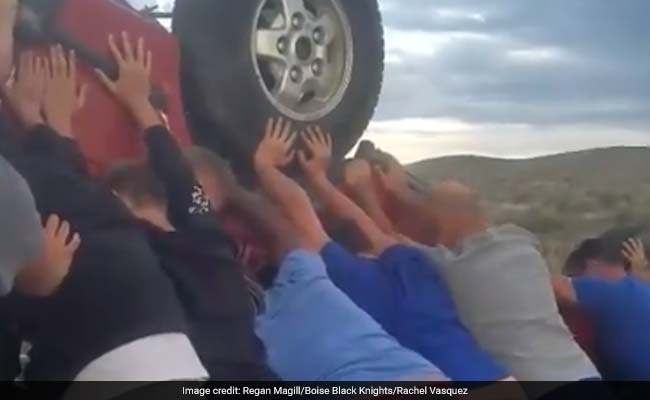 Caught on camera: Teens lifted an overturned car in order to help rescue a woman trapped inside it

Teamwork and sportsmanship were on total display when teens from a football team joined forces to rescue accident victims in USA's Oregon. A video circulating on Facebook shows the footballers lifting an overturned car in order to help rescue a woman trapped inside it. Their heroics have won them major praise from netizens.

According to a post shared by Facebook user Rachel Vasquez on May 31, the Boise Black Knights, a competitive football team, was on their way back after winning the National Championship. That's when they noticed the accident on an Oregon highway and decided to help.


According to the Idaho Statesman, the team comprises mostly of 13 to 14-year-olds. They helped Alan and Margaret Hardman, both 65, of Winnemucca, Nevada, who escaped with some broken bones and bruises. Ms Hardman was driving her husband back after a medical procedure.

"I'll tell you what - I don't know how we would have done it without them," Alan Hardman told Idaho Statesman. "They didn't even hesitate."

The accident was most likely caused due to high-winds, police said according to Idaho Statesman.

"That's awesome. Got goosebumps while watching this," comments one Facebook user. "Heroes on and off the field," wrote another. Click for more trending news