Video: Couple Falls Into Sea As Rope Snaps While Parasailing In Diu

"The rope snapped just as we attained the maximum altitude... Seconds later, we plunged into the sea." 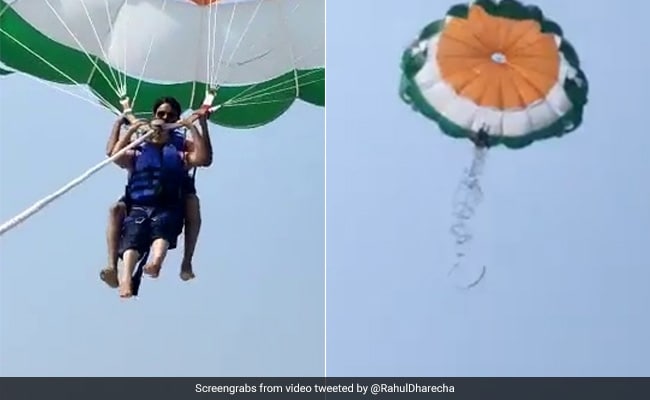 A Gujarat couple was left shocked after parasailing took a terrifying turn in Diu.

Ajit Kathad says he and his wife were left shocked after the rope of their parachute snapped while they were parasailing off the coast of Diu. The mid-air accident was captured in a video that has been widely shared on social media. According to the Times of India, Ajit Kathad, 30, and his wife Sarla Kathad, 31, were parasailing off the Nagoa beach in Diu on Sunday when the rope of their parachute broke, sending them hurtling towards the sea.

The Gujarat couple, in Diu for a holiday, were lucky to escape without injuries. They were wearing life jackets and were soon rescued by lifeguards deployed at the beach.

Heart-stopping footage shows that about a minute into the couple's parasailing ride, the rope that connected their parachute to a powerboat snapped, leaving them untethered.

Ajit Kathad's elder brother Rakesh, who was on the powerboat, was heard screaming as the couple plunged into the sea. "I was recording the video and had no idea what to do when the rope broke," he said afterwards. "I could see my brother and sister-in-law falling from a great height, and I never felt so helpless as I did at that moment."

The couple was eventually rescued by lifeguards of Palms Adventure and Motorsports, the private firm which runs the parasailing service.

@VisitDiu@DiuTourismUT@DiuDistrict@VisitDNHandDD
Parasailing Accident,
Safety measures in India,
and they said very rudely that this is not our responsibility. Such things happens. Their response was absolutely pathetic.#safety#diu#fun#diutourism#accidentpic.twitter.com/doN4vRNdO8

Rakesh later told reporters that he had pointed out to operators that the parachute rope looked frayed and worn-out. However, he was assured that nothing would happen and that the damaged part of the rope would not even make it to the air.

The owner of Palms Adventure and Motorsports, meanwhile, blamed the accident on heavy winds. "This is the first time that an incident like this has happened in the past three years because there were heavy winds on Sunday," said Mohan Lakshman to Times of India, adding that his company had a well-trained staff for rescue operations.

Ajit Kathad and his family, however, accused the parasailing service of negligence.

"After the rope snapped just as we attained the maximum altitude, the parachute started swaying from one way to the other as we didn't know how to control it. Seconds later, we plunged into the sea. While we remained afloat thanks to our life jackets, my wife was in a state of shock and couldn't speak for a few minutes," Ajit Kathad said while describing his ordeal to the Indian Express.

"The response from the service operator was very irresponsible. They said we were rescued and nothing happened and no one died," he added, accusing the staff of being rude.