The Red Coral Kukri snake was spotted on Sunday. 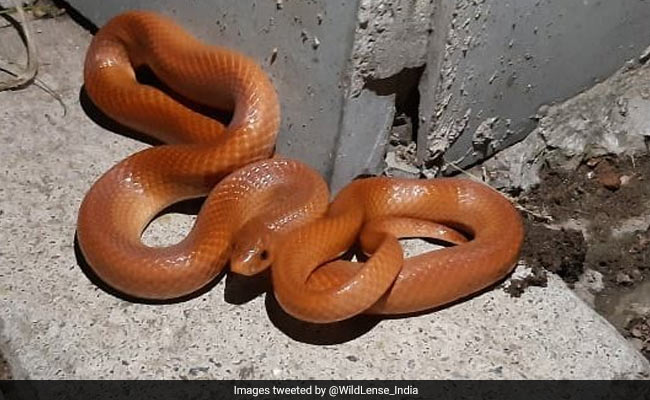 A rare sighting of the Red Coral Kukri snake.

A picture of the "very rare" Red Coral Kukri snake has created a stir on social media. The snake was spotted in the Dudhwa National Park in Uttar Pradesh's Lakhimpur Kheri two days ago. A photograph of the red snake was captured by a staff member and shared on Twitter by wildlife conservation and tourism organisation WildLense.

The reptile was first sighted in Dudhwa in 1936 and even its zoological name "oligodon Kheriensis" finds its roots in its Kheri-specific location. Sightings of this brightly-coloured snake are rare - it was seen last year for the first time after a gap of almost 82 years.

According to senior Indian Forest Service officer Ramesh Pandey, this is only the fourth sighting of the Red Coral Kukri snake in the last couple of years - which in itself is a marked increase from earlier sightings.

The red-coloured snake has captured social media's attention, with its picture collecting hundreds of 'likes' and comments. Many called the snake beautiful and wondered at its striking colouring.

According to experts, Red Coral Kukri is a nocturnal non-venomous reptile feeding on insects and worms. It gets its name from its red orange colour and its teeth, which are shaped like Nepali "khukri" to break eggs.