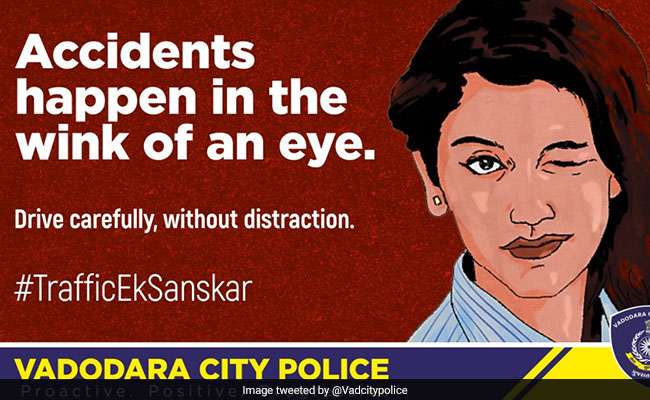 New Delhi: In 2018, it's safe to say that you can't afford to ignore social media. Turns out, that's especially true if you're running a police department. From Mumbai to Bengaluru, netizens have been impressed with cops upping their social media game and putting out tweets and viral posts sprinkled with witty pop culture references and puns. And the latest to catch the Internet's attention is the Vadodara City Police. From a nod to Malayalam actor Priya Prakash Varrier's famous wink to Singham himself, Ajay Devgn, Vadodara cops are using filmy references, witty puns and clever hashtags to drive their messages on safety home.

One of the most recent and much-appreciated posts on Twitter is this one, which features Internet sensation Priya Prakash Varrier.

"Accidents happen in the wink of an eye," warn Vadodara police, adding, "Drive carefully, without distraction."

Channelise your emotions to be a force to reckon with!#JoinTheForce#VadodaraPolice#BigLilCity#Vadodara#Police#JoinThePolice@GujaratPolicepic.twitter.com/gKp828JiiD

Promoted
Listen to the latest songs, only on JioSaavn.com
"This is about connecting with citizens using day-to-day popular language and icons to drive home the point... If I tweet that bribing is a punishable offence, nobody will give it a second glance. But our tweet with the tagline Kuchh le-de ke khatam karte hain (let's settle it with something) and hashtag #SarkariMehman went viral on WhatsApp and other platforms," he said.

Previously, social media campaigns by Mumbai Police and Bengaluru Police have gone viral dealing with all kinds of things from cyber crime to road safety. Click for more trending news