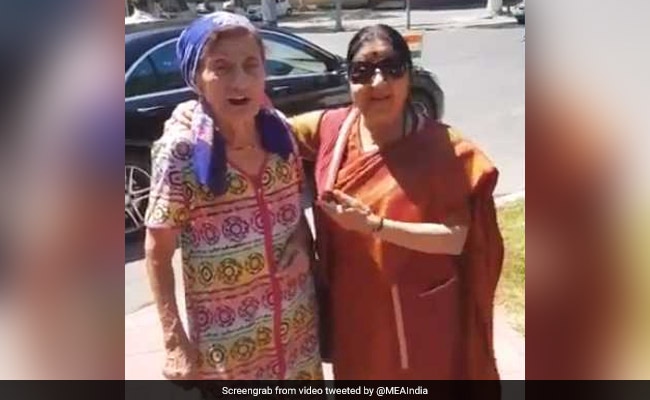 Among the things that people bond over, love for films and music pretty much tops the list. Proof of that was seen recently during External Affairs Minister Sushma Swaraj's maiden visit to Uzbekistan. A video posted on Twitter shows an Uzbek woman belting out her rendition of Ichak Daana from 1955 classic Shree 420 starring Raj Kapoor and Nargis. The video shows the foreign minister enjoying the little performance as she stood next to the woman singing the song.

The video was tweeted by External Affairs Ministry spokesperson Raveesh Kumar yesterday. "Bollywood knows no boundaries! More so in Uzbekistan where Raj kapoor and Nargis are household names..." he wrote on Twitter along with the video.

Watch the heartwarming rendition below:

Bollywood knows no boundaries! More so in Uzbekistan where Raj kapoor and Nargis are household names. Salute to this Uzbek woman for her spirit as she hums the song from the classic Shri 420! @SushmaSwarajpic.twitter.com/I9ksvWukxo

Not only Ms Swaraj, but even Twitter seems extremely impressed with the video. Since being tweeted, the video has received over 3,800 'likes' and more than 750 retweets - and still counting.

"How true! Cinema has no boundaries and no nationality. It touches every human," says one Twitter user. "Amazing... fascinating!" says another.