The pythons were found by farmers working in their field. 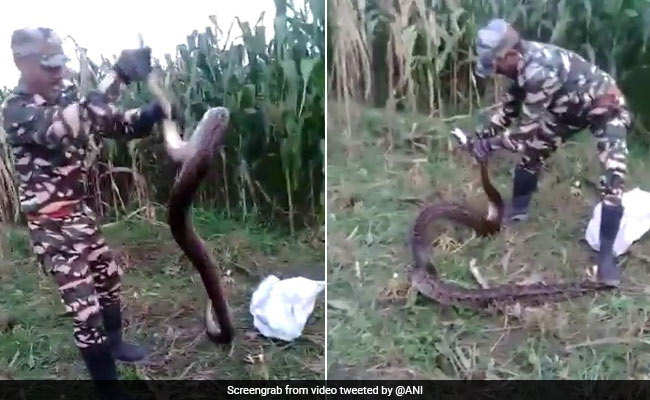 The forest department was called to rescue the two snakes.

The forest department reached the spot after locals alerted them to the presence of the snakes.

According to the department, both pythons were found when farmers noticed them while working on their fields on Monday, following which they informed the forest department. The team then caught the pythons and released them in the jungle.

"Both pythons are around 10 to 12 feet in length. They are often found in the area during changing seasons," an official said, according to news agency ANI.

A video shared on Twitter by news agency ANI shows one of the pythons being captured by the rescue team.

The video has garnered over 24,000 views on the microblogging platform.

"That's scary," wrote one person in the comments section, while others praised the courage of the rescue team.

Pythons are non-venomous snakes that kill their prey by constriction. They are some of the largest snakes in the world, and can grow over 30 feet in length. Currently, 10 python species are recognized.

Earlier this month, a huge python was spotted at a footpath in Mumbai in a sight that has left locals and social media viewers stunned.