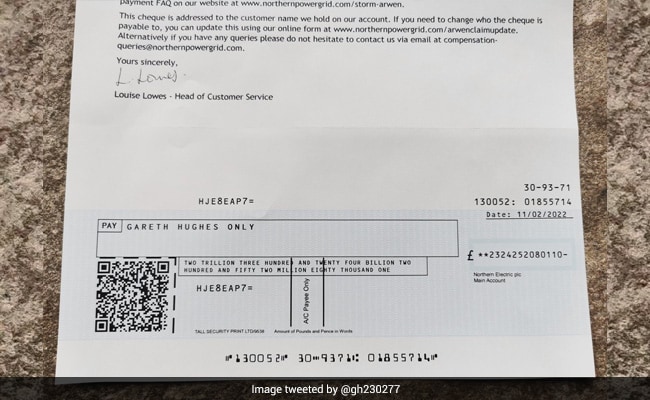 A UK resident got the shock of his life when he received a compensation cheque from his energy supplier. A photo, which has now gone viral, shows a whopping sum on the issued cheque. On February 12, Gareth Hughes, of Hebden Bridge, West Yorkshire, tweeted an image that suggests that energy supplier Northern Powergrid has issued a cheque of more than £ 2.3 trillion to him. If that isn't eye-watering, we don't know what is. Mr Bridge humbly thanked the service provider for the cheque and said, "Thank you for our compensation payment North Powergrid for the several days we were without power following Storm Arwen." But then he added, "Before I bank the cheque, however, are you 100% certain you can afford this?" The tweet has been liked over 56,000 times and retweeted over 6,000 times.

Thank you for our compensation payment @Northpowergrid for the several days we were without power following #stormarwen Before I bank the cheque however, are you 100% certain you can afford this? #trillionpoundspic.twitter.com/z5MNc2Nxl1

According to the Daily Mail, the cheque follows the disruptive "once in a generation" storms that occurred in the UK last November. Storm Arwen left several homes in the UK without a power supply. Mr Bridge was one of the customers who were being compensated for the sudden disruption of the power supply.

Mr Bridge's tweet caught the attention of North Powergrid, who replied to the post. The company responded to the post, "Hi Gareth, thanks for bringing this to our attention. Please DM us your contact details including address and postcode so we can correct this oversight. thanks, Phil."

Hi Gareth, Thanks for bringing this to our attention. Please DM us your contact details including address and postcode so we can correct this oversight. thanks, Phil.

However, it seems that Mr Bridge wasn't the only one to have received the shcoking sum of money in the compensatory cheque. In reply to North Powergrid, Mr Bridge said that knew at least four other neighbours who had received the same amount in their cheques.

DM sent. You might want to check what other payments you've made, as I'm aware of at least four other cheques for the same value sent to neighbouring properties. ????

Twitter is abuzz over this mistake. Some suggested that Mr Bridge should've banked the cheque.

Would have been funny if you'd have banked it. You could have told them you'd pay them back a fiver a week ????

According to BBC, a Northern Powergrid spokesperson, in a statement, said, "As soon as we identified the clerical error, which was caused by the electricity meter reference number being incorrectly quoted as the payment sum, we ensured all 74 customers' cheques were stopped so they could not be cashed." In the statement, the company has apologised for the error and thanked "honest" customers who have pointed at the mistake.