One of the snakes was 7-feet long, while the other measured a whopping 11-feet. 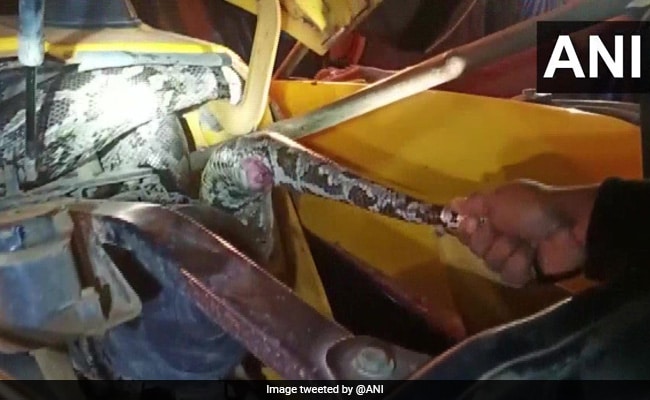 Two pythons were rescued from a JCB machine in Odisha.

Two giant pythons were rescued from inside a JCB machine in Odisha on Sunday morning. The snakes were found during beautification work being undertaken at a reservoir site in the Palligumula village of Berhampur district, according to news agency ANI.

Wildlife officials said that one of the pythons was 7-foot-long, while the other measured a whopping 11-feet. While the smaller of the two snakes was rescued quickly as it was found sitting on top of the JCB, the other was found inside the machine and took longer to capture.

Odisha: A python was rescued from inside a JCB machine in Palligumula village of Berhampur district.

After a rescue operation that lasted four hours, both the snakes were released back into the wild.

"A team of snake rescuers received a call around 9 PM on Sunday and reached the spot around 9.30 PM. They rescued one python which was on the top of the JCB machine easily. But another snake which was 11-feet long was inside the machine. It took over four hours to rescue it," said Swadhin Kumar Sahu, a snake rescuer who helped with the rescue operation.