Read inOther Languages
This Article is From Apr 13, 2021

"They are my pet gators. They love their chin scratches," she says 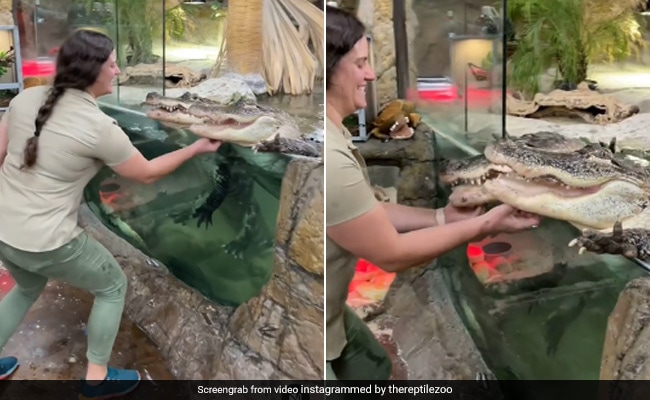 A caretaker at The Reptile Zoo was filmed petting two alligators

While there are thousands - if not millions - of videos on the Internet of dogs getting pampered by their humans, the same can't be said for alligators. Possibly because these reptiles have an extremely powerful bite and the potential to seriously injure humans and generally are best avoided. But one zookeeper at California's Reptile Zoo was brave enough to pet not one, but two alligators at once.

A jaw-dropping video shared by the zoo shows a woman approaching two alligators and scratching one of them under the chin. "They are my pet gators. They love their chin scratches," she says while reaching out to scratch the other alligator as well. However, she quickly withdraws the hand when the second gator makes a quick move, as if to nip her finger.

It goes without saying that these actions were performed by a professional, so don't try this should you ever find yourself face to face with an alligator. Watch the video below:

Since being posted on Instagram one day ago, the clip has garnered over 3.5 lakh views and hundreds of amazed comments.

"Alligator on the left was like haha you almost slipped, but I'm gonna get you next time," wrote one person in the comments section.

"You can't be a slow mover with them," another remarked.

According to the National Geographic, alligators are apex predators and hungry opportunists that will eat just about anything, although it is very rare for a gator to kill a person.