Twitter's Making The Same F.R.I.E.N.D.S. Joke About This Balenciaga Coat 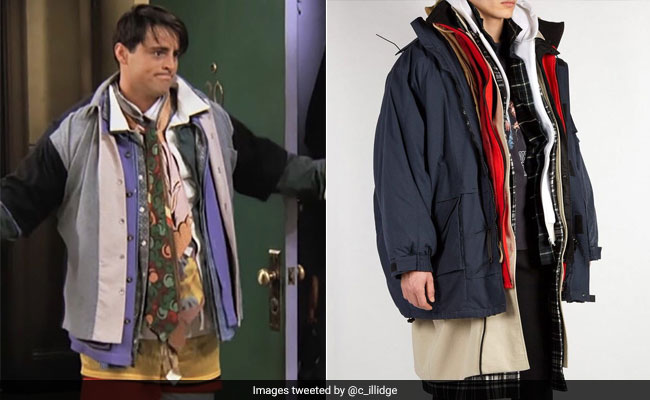 Twitter has been sharing pictures of Joey from F.R.I.E.N.D.S. and comparing it to the Balenciaga coat.

Back in May, Balenciaga came under the radar of online trolls for their shirt-T-shirt combination worth $1,290 (approximately Rs 87,000). Now, the luxury fashion house has again found itself on the receiving end of jokes - most of which are of the same kind - over their "Layered Oversized Parka". For the lack of a better description, the coat is made up of various colourful layers of different materials and is meant to be worn in chilly weather conditions. The coat, priced at $9,000 (approximately Rs 6.3 lakhs) on Barneys, has Twitter making the same joke about it.

Several people on Twitter have been posting pictures or tweeting about how the coat reminds them of a certain scene in popular sitcom F.R.I.E.N.D.S. Do you remember 'The One Where No One's Ready' episode from Season 3? There's a scene in which Joey (Matt LeBlanc) shows up wearing everything Chandler (Matthew Perry) owns.

Twitter has been sharing pictures of Joey from the scene and comparing it to the Balenciaga coat.

Balenciaga's seven(?!) "layer" coat reminded me of this moment from Friends, and it looks like I wasn't the only one to think that way! Who has $9,000 for that coat?! pic.twitter.com/p90z0Sd7bx

Imagine spending £8000 on this Balenciaga coat just to look like Joey from friends in the episode where he puts all Chandlers clothes on pic.twitter.com/ePykOJKizs

Thought I'd seen Balenciaga's $9k coat somewhere else before pic.twitter.com/f728AN7yN0

Here are some other reactions to the coat.

Anyone who thinks that the #balenciaga coat is nice needs to get new eyes! 9k for several layers sewn into each other? Seriously? Some of the shite that comes out these days and people actually pay for it? #fashion#newcoat

Question: Does that £6985 #Balenciaga coat even zip up pic.twitter.com/todb8jI0sZ

What do you think of this Balenciaga coat? Tell us using the comments section.