We rounded up the best tweets 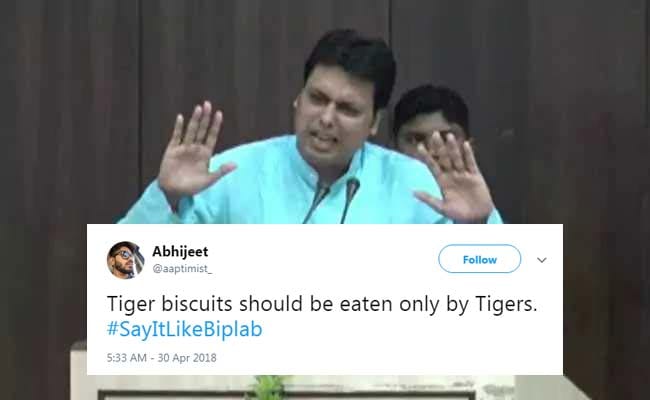 Tripura CM Biplab Deb has been in the news for the past few days.

Tripura chief minister Biplab Kumar Deb has been a regular in the news for the last few days. He has made his opinion known on a range of subjects - from his remarks against Diana Hayden to comparing his government with a lauki (bottle gourd). Perhaps the most bizarre of his comments, however, came on Friday when he said that civil engineers are better suited for civil services as compared to mechanical engineers.

"Those who are from a mechanical engineering background should not opt for civil services. Society has to be built up. Civil engineers have this knowledge... Because those in the administration have to build society," he said at an event in Agartala.

Since then, Twitter has been using the hashtag 'Say it like Biplab' to draw equally bizarre analogies.

Promoted
Listen to the latest songs, only on JioSaavn.com
We rounded up the best ones for you:

Tiger biscuits should be eaten only by Tigers. #SayItLikeBiplab

Higher studies can only be done on hill stations #SayItLikeBiplab

Only GATEkeeper should appear in GATE exam #SayItLikeBiplab

#SayItLikeBiplab Only Singh's can be Singers.

Only OX can take admission in OXford University #SayItLikeBiplab

Only those who have Apple gadgets can eat apple. #SayItLikeBiplab

The Chief Minister presented his views at an event to mark civil services day in state capital Agartala. His comments were widely derided on social media.