The Same Arctic Landscape, A Century Apart. Notice Anything Different?

The photos were tweeted by IFS officer Parveen Kaswan. 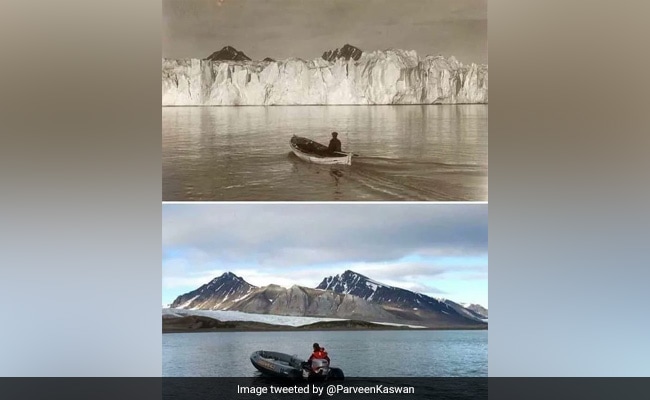 From witnessing changes in seasonal patterns to facing natural disasters, we have seen many signs of climate change around us. However, visual documentation often helps us understand these transformations in a better way. A comparison between two pics from the Arctic region is being widely shared on Twitter. The photos, taken over a 100 years apart, show a bleak image of climate change. IFS officer Parveen Kaswan shared the comparsion on Twitter. He captioned it, "This is Arctic 105 years apart. Both pictures were taken in the summer. Do you notice anything special? Courtesy Christian Åslund." In the first one, we can barely see the mountain range behind a wall of glaciers. And, the next pic tells a completely different story.

This is Arctic 105 years apart. Both picture taken in summer. Do you notice anything special. Courtesy Christian Åslund. pic.twitter.com/9AHtLDGKRb

This comparative study, shared by Mr Kaswan, was part of a 2003 series created by photographer Christian Åslund and Greenpeace, titled "Glacier comparison – Svalbard." According to a report by Snopes, the series consisted of seven such visual comparisons of contemporary photos and archival photos from the Norwegian Polar Institute.

"I shot this in 2003. Knowledge of climate change wasn't as common, our attitudes towards climate change were different," Mr Åslund said in a 2017 interview, talking about the newer image.

Netizens were taken aback by the sheer contrast of the two photos. A user wrote, "The picture hits you in the face."

This is worrying, as we all already know it, but picture hits you in the face.

Another noted that the disappeared ice was also a habitat for many animal species. This would have led to the extinction of these species too.

Ice dissappeared. A natural habitat for some species gone and with that the species also gone.

This person took note of the effects of global warming in these photos and mentioned how things had changed in Kakching, Manipur. The disappearance of sparrows and fireflies coupled with an increase in concrete structures worried him.

105 yrs is huge. Within a span of just 20 yrs in my native town- Kakching,Manipur,

A user asserted that climate change and global warming are real problems and not mere myths.

CLIMATE CHANGE AND GLOBAL WARMING IS REAL.
It is very unfortunate to see, How these World Leaders keep on ignoring one of the most important issue.

A few dreaded the comparative study of photos taken today and a few decades later. "Don't want the day to come, when a similar photo comparison will be made between Gangotri glacier of 2001 and 2031," a user wrote.

Don't want the day to come, when a similar photo comparison will be made between Gangotri glacier of 2001 and 2031.
Global warming isn't a myth.

Another had a dark prediction: "In another decade, we can see cement all over."

In another decade we can see cement all over; which can make up for those lost Ice..Be Human!!

What do you have to say about the photos taken by Christian Åslund?

For Jeff Bezos' Girlfriend Lauren Sanchez, Her Favourite Place In The World Is...