An exit that has set the internet buzzing. 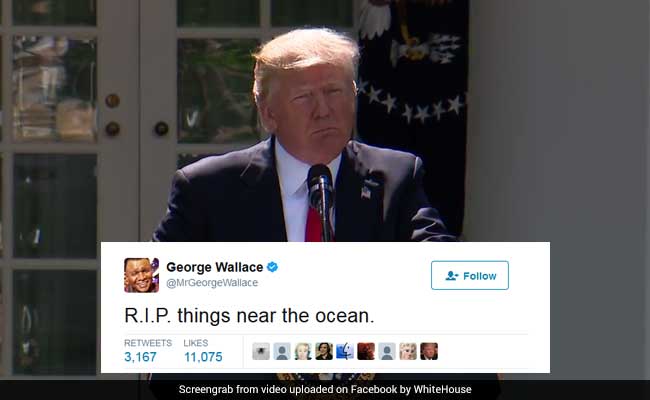 Donald Trump's decision to exit the Paris climate agreement was met with criticism.

At a time when global warming has been acknowledged as a real threat, US President Donald Trump announced yesterday that he would be withdrawing the United States from the landmark Paris climate agreement - a decision that seems to have disappointed not just environmentalists but also several world leaders and businessmen. The internet, predictably, has been buzzing since the announcement, with many criticizing the decision as reckless and disgraceful. We rounded up some of the most biting tweets that take a dig at Mr Trump's decision to pull out of the Paris climate deal. Read on:

Millennials had an important question

are they still gonna call us snowflakes when those don't exist anymore?

R.I.P. things near the ocean.

"One nation, under water, with liberty and justice for coal."

Donald Trump, Ivanka Trump, Jared Kushner, Rick Perry & Steve Bannon walk into a bar & the bar is the earth & it overheats & we all die.

As a matter of principle, I've resigned from the President's Council over the #ParisAgreement withdrawal.

Am departing presidential councils. Climate change is real. Leaving Paris is not good for America or the world.