Bengaluru traffic police revealed that the signboard urges commuters to exercise caution as a blind person is likely to be on the road. 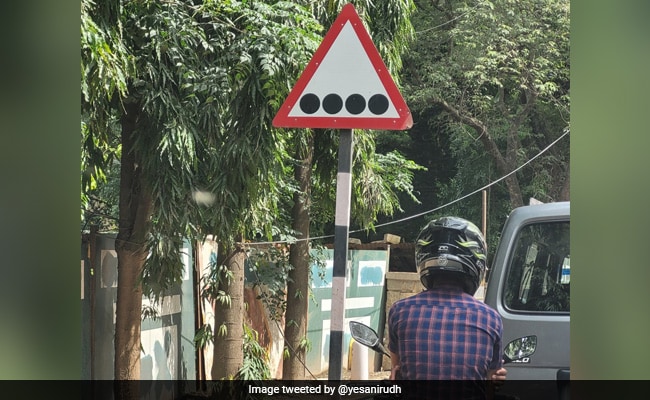 A commuter in Bengaluru recently spotted an unusual road sign and shared a picture on social media, tagging the traffic police to clear the doubts.

Taking to Twitter, curious commuter Aniruddha Mukherjee shared the image of the sign showing four black dots on a white background. In the caption, he wrote, "What traffic symbol is this? @wftrps @blrcitytraffic. This is put up just before Hopefarm signal!"

What traffic symbol is this?@wftrps@blrcitytraffic

To this, the traffic police in the Whitefield area responded swiftly and explained why the sign had been set up. The officials revealed that it is a "cautionary signboard" which indicates that a blind person can be present on the road and therefore commuters need to exercise caution while driving.

"Dear Sir, that is a cautionary sign board which (warns) that a blind person may likely be on the road (and so you must) exercise caution while driving. There is a school (for blind people) at Hope Farm Junction where this board is placed," the traffic police said in a tweet.

Dear Sir,
That is a Cautionary sign board which tells about a possible blind person likely on the road. Exercise caution while driving.
There is a blind school at hopefarm junction where this board is placed.
Regards

Following the traffic police's response, several social media users lauded the move. "Wow. Never knew about this sign. Thanks," wrote one user. "Awesome I guess time for @blrcitytraffic to share some light on traffic signs daily on Twitter and other rules around it. Will help us educate further," added another. A third said, "Thank you for the education! Most of us are unaware of these road signs and their meaning!"

Meanwhile, this is not the first time a unique signboard from Bengaluru has gone viral. A while back, a Twitter user shared two images of a no parking signboard outside a house in Koramangala. One of these boards read, "Don't even think of parking here," while the other one read, "No parking, not 5 minutes, not 30 seconds, not at all!"

The post had led to a discussion on social media, with some internet users favouring the move while others speaking against it.